Once upon a time there was a country called Zaïre.

People sowed their seeds and when the time came collected their own grain. Kids played in the streets, jumping rope, and perverts watched from behind trees as in any other place.

Then one day one of them was given a talent: with some paint and a brush he was to reproduce life in Zaïre, while later showing his paintings all over the world. People over the world would praise his art and reward him. 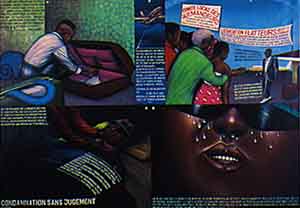 Why him? With his talent our hero had also been given a special pair of eyes, and these eyes having the quality of looking from afar were to see into the particular.

Why did he now feel somehow scattered by girls urinating while standing? by boys blowing into used condoms as if they were balloons? by young women in shiny dresses passing from one man's arms to another's, being exchanged for money? This is how he knew this was what he was chosen to paint, and continued to look around him.

Housewives had no further luck, their cooking being rejected flew from the pan into the garbage, and when the time came to take them to the movies, their husbands parted for a second wife. While moving over dirty puddles, life in the streets displayed packed buses, and many thin people who, depicted with big bellies, stood in long lines, awaiting...

This he saw, this he painted. People around the world praised it and rewarded him with another pair of eyes.

Abstracts of a Conversation with the Artist

I like,
I said I like all works
of art, all that my colleagues do, interests me.
It's art, what we do
is art, all this, painting, sculpture,
is art. There is no limit, what we do

word in Ingala, the
tongue of Zaïre, it's an adage which I may translate

in English as faith, buy me,
give me as a gift. It designates people who believe that in life one may have it all, demanding instead of working, they expect one to give to them. I want to inform these people that difficulty and suffering are wherever I go, that there also is misery, then it should not be that one has been given at all times.
For at present, in their minds, people that don't travel think that when one travels — there you depart,

in sadness for those people there who do not understand money is difficult to make, then he is in pain on account of them who upset him. You may have two pairs of shoes let's say, then because you return from a trip a friend would say, I do not have shoes, couldn't you give me a pair of shoes? Since you pity this person who has no shoes, you give them to him. Then yourself, who already had two pairs of shoes, out of control you distribute this other pair of shoes and instead of progressing you regress.
As I understand it, in inviting the people to work,

to make their own effort,

they may have something instead of not doing

while waiting that they be given.
Then this person that shares and shares soon he finds himself with nothing,
so he cries — what disgrace,

what stupidity
that I have come to do. I have given it all away and myself I'm left with nothing. Everything I had I have given away because they asked for it. Ah! if I had known it — In thinking this, tears fall from his eyes.