Why does a Letter always arrive at its Destination?
SLAVOJ ZIZEK

Ethics in the Cure
COLETTE SOLER

On the Beginning of a Psychoanalysis
CARMEN GALLANO

Passion in the Cure
JEAN-PIERRE KLOTZ

Why does a Letter always arrive at its Destination?

Why, indeed? Why could it not — sometimes, at least — also fail to reach it?1 Far from attesting a refined theoretical sensitivity, this Derridean reaction to the famous closing statement of Lacan's "Seminar on 'The Purloined Letter' "2 rather exhibits what we could call a primordial response of common sense: what if a letter does not reach its destination? Isn't it always possible for a letter to go astray?3 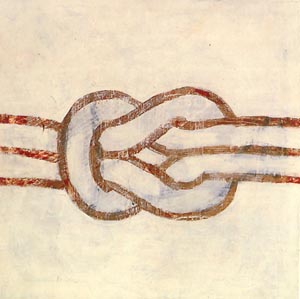 In a first approach, a letter which always arrives at its destination points at the logic of recognition/misrecognition (reconnaissance/méconnaissance) elaborated in detail by Louis Althusser and his followers (e.g. Michel Pêcheux)4 : the logic by means of which one mis/recognizes oneself as the addressee of ideological interpellation. This illusion constitutive of the ideological order could be succinctly rendered by paraphrasing a formula of Barbara Johnson: "A letter always arrives at its destination since its destination is wherever it arrives."5 Its underlying mechanism was elaborated by Pêcheux apropos of jokes of the type: "Daddy was born in Manchester, Mummy in Bristol, and I in London: strange that the three of us should have met!6 In short, if we look at the process backwards, from its contingent result, the fact that events took precisely this turn could not but appear as uncanny, concealing some fateful meaning — as if some mysterious hand took care that the letter arrived at its destination, i.e., that my father and my mother met....


1. Jacques Derrida, "The Purveyor of Truth" The Post Card: From Socrates to Freud and Beyond, Chicago: University of Chicago Press, 1987.back up
2. Jacques Lacan, "Seminar on The Purloined Letter," in The Purloined Poe. Baltimore: The Johns Hopkins University Press, 1988.back up
3. Since this recourse to common sense takes place more often than one might suspect, systematically even, within the deconstruction, one is tempted to put forward the thesis that the very fundamental gesture of deconstruction is in a radical sense common sensical. There is, namely, an unmistakable ring of common sense in the deconstructivist insistence upon the impossibility to establish a clear-cut difference between empirical and transcendental, outside and inside, representation and presence, writing and voice..., in its impulsive demonstration of how the Outside always-already smears over the Inside, of how writing is constitutive of voice, and so forth — as if deconstructivism is ultimately wrapping up common sensical insights into an intricate jargon. Therein consists perhaps one of the hitherto overlooked reasons for its unforeseen success in the USA, the land of common sense par excellence.back up
4. Michel Pêcheux, Language, Semantics and Ideology, London: MacMillan, 1982.back up
5. Barbara Johnson, op. cit., p. 248.back up
6. Jacques Lacan, "Intervention on Transference" in In Dora's Case, ed. by Charles Bernheimer and Claire Cahan, London: Virago Press, 1985.back up