My Inflatable You
DANIEL PINCHBECK

The Subject Defined by Suffrage 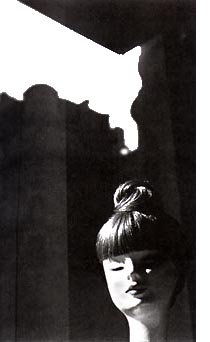 Last May, after Claude Lefort1 delivered the keynote paper at a conference hosted by the Center for the Study of Psychoanalysis and Culture in Buffalo, a member of the audience who has written several books on psychoanalytic subjects stood up, very confused and a bit piqued. He had come to hear papers on the ego, the id, repression, "personality disorders" and wondered how a paper like Lefort's, which never mentioned Freud and used no psychoanalytic vocabulary qualified for this event. Where was the psychoanalysis in his paper? This man's confusion is a common one; it stems from a conflation of vocabulary with concepts, for although Lefort never spoke the words this man was waiting to hear, it is clear that the concepts of psychoanalysis have defined the very field which Lefort's work inhabits. Lefort himself periodically acknowledges this fact, as in the statement he makes at the end of his essay:

"Some readers will no doubt suspect that my reflections
are nourished by psychoanalysis. That is indeed the case.
But this connection is meaningful only if one asks oneself
at which hearth Freud's thought was lit."

2 It is evident that Lefort has asked himself this question and answered it, for as his next sentence implies, he believes that Freud's thought was lit at the hearth of the democratic adventure or, as he puts it here, by the "indetermination that was born from the loss of the substance of the body politic."3 In other words, Lefort is saying, if his theorization of democracy seems to be nourished by psychoanalysis, this is only proper, since psychoanalysis was originally nourished by the experience of democracy.

One might expect that psychoanalysis would demur from this position, but in fact it is in full accord. Setting aside, for the moment, the great works of Freud, Totem and Taboo, Group Psychology and the Analysis of the Ego, Civilization and its Discontents, works which attempt to theorize the modern (as opposed to the classical, predemocratic) phenomenon of the crowd, I will simply draw your attention to the fact that one of the founding facts of psychoanalysis, i.e., primary repression, is a clear registration of the founding fact of democracy: that it is no longer possible completely to determine the image of the social whole, "the substance of the body politic." Starting from the enigmatic notion of anticathexis — which is the process that defines primary repression — not only is the complete hypercathexis of the social doomed to fail, but so, in addition, is the total withdrawal of cathexis from the social onto the ego. In Freud's structural description, some libidinal fraction always remains as left-over to de-complete each image, that of the individual ego as well as that of "the people." The bodily ego and the body politic both break up, modern man becomes "lost in the crowd."

From [Foucault's] angle the paradox of modern power (it subjects all, but is wielded by no one) begins to look quite familiar. Is this not the same paradox which is manifest in scientific statements, maxims, the l9th century realist novel, that entire class of statements whose badge of truth is their erasure of all the traces of enunciation? If, despite all the well-meaning and careful attempts by Foucault and others to dispel the "paranoid" interpretations of his theory, modern power, as he describes it, still seems inescapable, then this is surely the result of the fact that by announcing themselves in such a neutral, general form (that is, as coming from nowhere), the discourses of power seem to embrace everyone in their address.

[...] We are left with the crucial and obvious question: what is the difference between taking desire literally and taking a statement literally?
What makes this question crucial is the fact that neither Lefort nor psychoanalysis posits a subject 'outside' history or society; each assumes, rather, that the subject is completely absorbed in it. And yet neither makes the subject the idiot of history by taking his statements literally, that is, by reducing them to their historical referent. When instead one reads the subject's 'desire' literally, one adds nothing to his statements, except, as we mentioned, the grain —which is nothing positive. The grain "has no civil identity, no personality;" it is in no way equivalent to the "accent of an era, a class, or a regime." In brief, it is "not personal; it expresses nothing" of the subject who speaks.

4 The grain merely marks the limit of language and thus of our knowledge of the other. But although the grain is not the index of a particularity with any content, social or otherwise, it does serve as index of a particular absolute, it does mark the statement as belonging to its speaker uniquely. For by adding our own ignorance to the statement, we suppose its speaker to enjoy a special relation to language, or, to put it differently, we suppose an enjoyment inaccessible to us. This supposition converts all his statements into manifestations of this inaccessible jouissance.

I have been saying that we must 'add' the grain to a subject's statements, but this is perhaps misleading. For what we should say is that we must preserve the grain which historicism effaces. Historicism can and does do without the subject and the grain which is its equivalent. Here, statements, including petitions for rights, manifest not the particular desires of subjects, but some anonymous historical position which speaks through the individual. We have returned once again to Hacking and his account of the avalanche of numbers, the way they engage in "making up people." Historicism. How is it that such a theoretical position came to be viewed, as it is by many today, as progressive? We have only to recall Frege's primary objective — to exclude from the passage of numbers that which, before his intervention, had been considered its support:
the subject

defined by attributes [and] disposing as of powers,
of a faculty of memory necessary to close the set
without loss of any interchangeable elements, and
a faculty of repetition which operates inductively.

5 In other words, Frege wanted to exclude the psychological subject, as englobing, originating consciousness in order to construct a purely logical, scientific theory of the system of numbers. Historicists similarly want to establish the autonomy of the historical field, to make it independent of the psychological subject presumed to be prior and external to the field. History, they argue, is not dependent on any prior reality, but rather constructs reality, that is, operates performatively. The subject thus falls to the level of an object in its field, a construction. It is reduced to a number of "subject positions," the product of a multitude of different discourses. The problem with historicism — and this is to put it in the most neutral terms — is that it participates in a miscalculation, a simple error in counting. For in counting the elements that make up any subject, it always comes up one short. What it fails each time to include in its list is the paradoxical element discovered by Frege: the supernumerary, empty concept, the X, the grain, the objet a, which marks the limit of the system. If you don't include it, there can be no performative; as Frege taught us, the system will not close. You are left with a mere heap or series of elements. If you do include it, the performative works, you can construct the system; but this system then becomes a manifestation of this X, this grain, this objet a. All this means is that the empirically different elements in the system begin to function as logical elements, substitutable for others in the same category without loss of truth, the moment they attach themselves to this real-impossible object.

This impossible object, or X, is the subject — not the substantial, psychological one previously evicted, but the subject of psychoanalysis and democracy, the nonsubstantial subject of the unconscious. I have tried to argue that it is essential to the operation of the performative and that historicism's elimination of it is therefore an error. I want now to argue that it is more than that. For this subject is one of those manifestations of that empty place Lefort has taught us to see as fundamental to democracy. It is a marker of our lack of knowledge, of the uncertainty which compels us continuously to decipher, to interpret the other and thus our social laws. It keeps alive desire and forbids us to rule on another subject's actions through a mere application of existing laws. What is at issue in the elimination of this subject is not simply an academic error, but an alignment with a different sort of power.

Finally, I would like to close by remarking the difference between the empty place installed by this elimination of the subject and that installed by democracy. As I said earlier, the historicist description of the empty place of enunciation maintains that it is no one 'in particular' who speaks, i.e. anyone may occupy this place of power who empties himself of "all his particular-historical/social-traits:"6 race, creed, color, etc. We should now note that the totalitarian leader is just such a nobody. Unlike the classical master, who was someone everyone — or everyone who counted — was encouraged to 'emulate,' this modern leader is someone we all 'are,' that is, he is merely the retroactive effect of the general will-of-the-people. The place of this leader is thus a point of convergence, a point where the full sense of this unified will is located. The empty place of democracy, on the other hand, is a place of nonsense, the place where a signifier is lacking. This empty place 'also' gathers all the people, but not all the people in general; rather it gathers them one by one, in their "distributive exhaustion." As you know, the analyst is supposed to be an empty screen as well, but we can see from the above distinction that this does not mean he or she should be the blank screen on which analysands project their ideal images of themselves, but rather a screen which refuses to reveal a ready answer and which thus initiates their desire. Analysands seek in analysis not to be categorized, but to present themselves in their singularity — just like the people in a democracy. ° Society for Phenomenology and Existential Philosophy, October 1992, Boston. back to top
1. "The Image of the Body and Totalitarianism." Claude Lefort is, arguably, one of the foremost theorists of democracy, though, in the U.S., his work has not yet received the attention it deserves. A student of Merleau-Ponty, he is the editor of his teacher's posthumously published The Visible and the Invisible. Lacan praises Lefort's contribution to this text in Seminar XI.back up
2. Claude Lefort, The Political Forms of Modern Society: Bureaucracy, Democracy, Totalitatianism, (Cambridge, MIT Press, 1986) p.back up
3. Ibid., p.back up
4. Roland Barthes, "The Grain of the Voice," Image/Music/ Text, trans. Stephen Heath (New York: Hill and Wang, 1977), p. 182.back up
5. Miller, op.cit., p. 27.back up
6. This phrase is taken from an article by Francis Wolf, "Nul n'est cense ignorer la loi," (Ornicar?, nos. 26/27 [Summer 1983]) which provides further theoretical support for the distinction I am trying to make here between two different notions of the "empty place." back up