My Inflatable You
DANIEL PINCHBECK

The withheld work of art is
the only eloquence left.
Don De Lillo; Mao II

So where do we position an operative notion as nebulous as The Three? Surely the logical location is between the Masquerade and the Gaze, a zone which must resemble a mirror, but a mirror that only reflects falsity, deception, an inverted narcissism worthy of the Transylvanian glass that will never grant Dracula the image he so hungers for.

Can the Gaze outwit the Masquerade, can the Masquerade reflect the Gaze? These are the questions that play over, one might dare a 'dapple,' The Three.

Unfortunately, improbably, the debate requires a degree of prior information, a certain knowledge has to be granted before it can be rubbed away, guided to fresh contours.

Thus The Three is a team of conceptual artists. Three young women who work together in the closest possible collaboration, who dress and possibly think alike. (The disaster has already begun: what lurks but patriarchy behind the notion that women who wear the same clothes share the same criteria? Chanel-Republican, a shaky equation.)

The Three travel a great deal. They live together, but exactly where is fluid conjecture. The ambiguity of their geographic status is due to the fact that they work simultaneously in the two industries that require almost constant travel: contemporary art and fashion. The members of The Three happen to be professional fashion models just as they happen to be practising artists, neither of these two roles are privileged. There is nothing more interesting or impressive about their having an exhibition in Bruxelles than their doing a catwalk show in Tokyo.

They refuse to deal in the varied snobberies, intellectual, social, of either the art or fashion world.

They are continually between, continually Other, neither one nor two, always Three, a shadow cast by the gap. 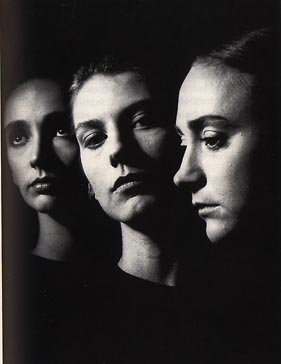 What do fashion models "produce"? What do conceptual artists "produce"?

The Three resolve the equation with a resounding nothing, that zero we can mistake at a glance for the female.

Just as the model does not create, does not produce but only appears, thus as artists The Three have never issued a single object, the smallest statement of intention, nothing that could be qualified, codified as an 'art work.'

What models and artists produce are meaning. The Three generate meaning continually, but a meaning they refuse to elucidate for us. Qualification, explication belong to the Master and The Three seek to avoid the fatal entrapment of all association with the Master.

They do not give themselves for sale, nor for the ultimate commerce of traded statements of intention, the slavery of self-explanation.

Here, in The Three, we have a brief redemption from this self-imposed exile, the continual refugee status of the female, because they act out the role of the castrated, of the enslaved, but with the smile of the Master.

They have castrated themselves, the single forbidden, impossible act: to become eunuchs by choice. And in that choice they have jammed the engines of jouissance.

In the same article as quoted above, Bourriaud writes; "It is the micro-systems created in the act of communicating that make up the real subject of work by Philippe Thomas, The Three, Seymour Likely or Jeff Koons. The logo and the corporation actualize the concept of the double."

Of course The Three fight the notion of the double inherently, for the only doubling is that of the image and subject, the blur of doubt that hovers between the unification of signifier and signified.

If the Third sometimes acts the role of the Anima, the essential shadow, the soul-stain, it is only because it has made itself free of the obligations of the masculine or feminine, the reducible.

Everybody who writes about them, photographs them, speaks of them, becomes them. They have no identity other than that granted by the Other.

In Joan Riviere's "Womanliness as a Masquerade," we are presented with the new 20th century question of the 'career woman,' the nature of femininity amongst those engaged in professional work.

The Three exploit exactly this paradox of female work. While the majority of women still do the same work as men, but for less pay, there is only one professional arena in which women earn as much, or more than their male equivalents.

The answer is in being a fashion model, or alternatively a movie actress, meaning an actress good looking enough to be, or have been, a model.

But as a model you are also obviously, continually at the mercy of the patriarchy. It is the male photographer, the male booker, the male advertising executive, the male designer, the male audience, that ultimately controls your career.

The contemporary artist is also a favored female role model; where you can be sensitive, nurturing, gentle, while also being a professional, earning real money, creating your own life, your destiny. In this equally delicious myth, this alternative fairy story for every growing girl, you can have your gender and eat it, you can be a female success story while sacrificing none of your femininity.

Of course it hardly takes the Guerilla Girls to make blatantly obvious that the art world operates, like the fashion world, as a subtle, highly sophisticated version of universal patriarchal business culture.

The Three are a bitter parody of the utopian dream offered by fashion, art, leisure industries; that 'Womanliness as Masquerade' can actually be turned into a salary-paying proposition, and that nobody will be hurt in the process.

There always has to be a price to be paid.

That price is what The Three lay before us as a set of glossy photographs.

That price is our own image.