"There is no passion to be found playing small—in settling for a life that is less than the one you are capable of living." —Nelson Mandela 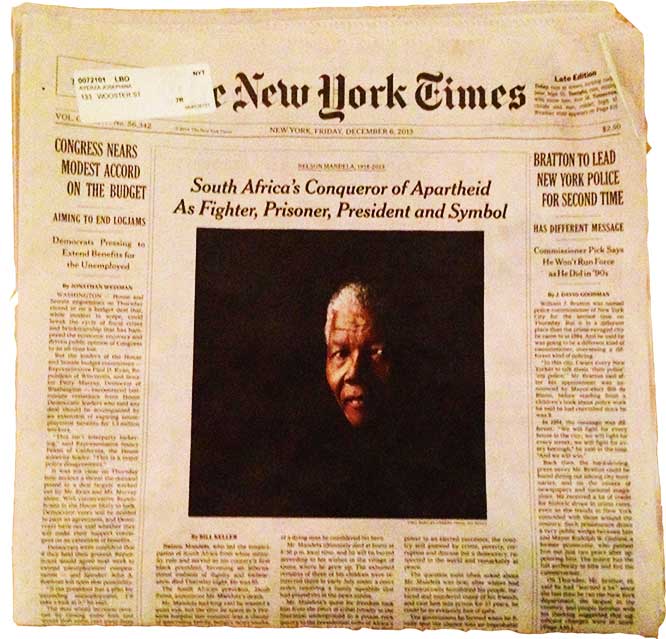 In the last two decades of his life, Nelson Mandela was celebrated as a model of how to liberate a country from the colonial yoke without succumbing to the temptation of dictatorial power and anti-capitalist posturing. In short, Mandela was not Mugabe, South Africa remained a multi-party democracy with free press and a vibrant economy well-integrated into the global market and immune to hasty Socialist experiments. Now, with his death, his stature as a saintly wise man seems confirmed for eternity: there are Hollywood movies about him — he was impersonated by Morgan Freeman, who also, by the way, played the role of God in another film; rock stars and religious leaders, sportsmen and politicians from Bill Clinton to Fidel Castro are all united in his beatification.

It is all too simple to criticize Mandela for abandoning the socialist perspective after the end of apartheid: did he really have a choice?

Is this, however, the whole story? Two key facts remain obliterated by this celebratory vision. In South Africa, the miserable life of the poor majority broadly remains the same as under apartheid, and the rise of political and civil rights is counterbalanced by the growing insecurity, violence, and crime. The main change is that the old white ruling class is joined by the new black elite. Secondly, people remember the old African National Congress which promised not only the end of apartheid, but also more social justice, even a kind of socialism. This much more radical ANC past is gradually obliterated from our memory. No wonder that anger is growing among poor, black South Africans.

South Africa in this respect is just one version of the recurrent story of the contemporary left. A leader or party is elected with universal enthusiasm, promising a “new world” — but, then, sooner or later, they stumble upon the key dilemma: does one dare to touch the capitalist mechanisms, or does one decide to “play the game”? If one disturbs these mechanisms, one is very swiftly “punished” by market perturbations, economic chaos, and the rest. This is why it is all too simple to criticize Mandela for abandoning the socialist perspective after the end of apartheid: did he really have a choice? Was the move towards socialism a real option?

It is easy to ridicule Ayn Rand, but there is a grain of truth in the famous “hymn to money” from her novel Atlas Shrugged: “Until and unless you discover that money is the root of all good, you ask for your own destruction. When money ceases to become the means by which men deal with one another, then men become the tools of other men. Blood, whips and guns or dollars. Take your choice – there is no other.” Did Marx not say something similar in his well-known formula of how, in the universe of commodities, “relations between people assume the guise of relations among things”?

In the market economy, relations between people can appear as relations of mutually recognized freedom and equality: domination is no longer directly enacted and visible as such. What is problematic is Rand’s underlying premise: that the only choice is between direct and indirect relations of domination and exploitation, with any alternative dismissed as utopian. However, one should nonetheless bear in mind the moment of truth in Rand’s otherwise ridiculously-ideological claim: the great lesson of state socialism was effectively that a direct abolishment of private property and market-regulated exchange, lacking concrete forms of social regulation of the process of production, necessarily resuscitates direct relations of servitude and domination. If we merely abolish market (inclusive of market exploitation) without replacing it with a proper form of the Communist organization of production and exchange, domination returns with a vengeance, and with it direct exploitation.

The general rule is that, when a revolt begins against an oppressive half-democratic regime, as was the case in the Middle East in 2011, it is easy to mobilize large crowds with slogans which one cannot but characterize as crowd pleasers – for democracy, against corruption, for instance. But then we gradually approach more difficult choices: when our revolt succeeds in its direct goal, we come to realize that what really bothered us (our un-freedom, humiliation, social corruption, lack of prospect of a decent life) goes on in a new guise. The ruling ideology mobilizes here its entire arsenal to prevent us from reaching this radical conclusion. They start to tell us that democratic freedom brings its own responsibility, that it comes at a price, that we are not yet mature if we expect too much from democracy. In this way, they blame us for our failure: in a free society, so we are told, we are all capitalist investing in our lives, deciding to put more into our education than into having fun if we want to succeed.

At a more directly political level, the United States foreign policy elaborated a detailed strategy of how to exert damage control by way of re-channeling a popular uprising into acceptable parliamentary-capitalist constraints – as was done successfully in South Africa after the fall of apartheid regime, in Philippines after the fall of Marcos, in Indonesia after the fall of Suharto and elsewhere. At this precise conjuncture, radical emancipatory politics faces its greatest challenge: how to push things further after the first enthusiastic stage is over, how to make the next step without succumbing to the catastrophe of the “totalitarian” temptation – in short, how to move further from Mandela without becoming Mugabe.

If we want to remain faithful to Mandela’s legacy, we should thus forget about celebratory crocodile tears and focus on the unfulfilled promises his leadership gave rise to. We can safely surmise that, on account of his doubtless moral and political greatness, he was at the end of his life also a bitter, old man, well aware how his very political triumph and his elevation into a universal hero was the mask of a bitter defeat. His universal glory is also a sign that he really didn’t disturb the global order of power.

This is the second of three masterclasses (25th, 27th and 29th of November) by Professor Slavoj iek on the topic of Communism: An Idea that Divides.

It seems that in 1989, with the disintegration of Communism, the two centuries of the radical Leftist “paradigm” were over, that this “paradigm” exhausted its potentials, in spite of some recent half-baked attempts to resuscitate it (in Latin America, in Nepal…); that today, Communism is simply no longer an Idea that divides. So what DOES divide today? The answer seems no less clear: the endless struggle between liberal permissiveness and fundamentalist intolerance. However, do these two poles not implicate and strengthen each other? The true line of division remains the one between the totality of the existing global capitalist universe (whose immanent political antagonism is the one between liberal democracy and fundamentalism) and the radical emancipatory (Communist) idea of breaking out of the very space of this division.

Facebook event page
Do not reply to this email
To UNSUBSCRIBE:
Email: https://www.lacan.com/unsubscribe.html
Subject: unsubscribe