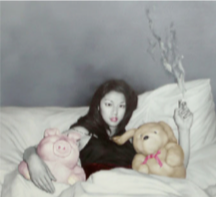 in the era of the sinthome and semblant

We may first place Ordinary Psychosis in a diachronic sense within the work of Lacan. The signifier “Ordinary Psychosis” is not one of Lacan’s, but of Jacques-Alain Miller, but the signifier and its conceptualization are linked to the last teachings of Lacan. First, we find Ordinary Psychosis articulated with the sinthome, from Seminar XXIII. Some analysts use Ordinary Psychosis to designate a psychosis without evidence of an acute break, or the extraordinary symptoms of a classic psychosis, in the model of Schreber. In this context, analysts use Lacan’s sinthome to articulate a psychic stabilization, that holds psychic structure together, as Lacan did with Joyce, where his ego, his writing, repaired a deficit in Joyce’s Imaginary presumed from the bodily disturbance described in Stephen Hero. This has led to a debate: is Joyce an Ordinary Psychotic? Joyce may have never presented with an acute psychosis, but his means of sinthomatic stabilization is not ordinary, but quite extraordinary. This question of Joyce interrogates the way we use Ordinary Psychosis. Do we take ‘ordinary’ to refer to all subjects with a psychotic structure for whom there is no evidence of extraordinary phenomena, or is it rather to be used in a circumscribed sense, in which the sinthomatic stabilization is what is ordinary, ‘banal’ as M.-H. Brousse elaborates, one more like neurosis?

Ordinary Psychosis is also linked to what Miller has referred to as the semblantization we find in the last Lacan. One is that of the semblantization of the Name-of-the-Father. No longer the crucial ‘real’ pivot point in psychic structure of “A Question Preliminary …,” Lacan first pluralizes the Name-of-the-Father in the eponymous Seminar and then makes it a function, or predicate. The object a, a residue of jouissance in The Four Fundamental Concepts…, is reformulated in Seminar XX (Encore) as a semblant of being. The same is true of the Other. This had substance, as the ‘treasure trove of signifiers’ in “The Subversion of the Subject” (Écrits). Here too we find a shift in Lacan’s teaching to an Other which is barred, which does not exist, but which still functions as a semblant. This semblantization generates a tension between a use of Ordinary Psychosis that preserves the distinction between neurosis and psychosis and a perspective in which we find a universal character to psychosis, which we find elaborated in a variety of ways, from Lacan’s statement that ‘all the world is mad’ to Miller’s elaborations of a universal foreclosure (of jouissance itself, always excessive to the power of the Symbolic—language itself functioning as a delusion for all speaking beings).

The notions of sinthome and semblant also allow us to shift from a diachronic to a synchronic perspective about Ordinary Psychosis and psychic structure. Freud’s clinic and Lacan’s first clinic is a clinic of neurosis. There is a substantial quality to the Other and the Name-of-the-Father (as the stabilizing point of the Other) which exist. In this clinic, psychosis is conceived with reference to neurosis, as an exception, based on foreclosure, the non-existence of this thing in that place. In the clinic of the last Lacan, however, the sinthome has a universal place as the way in which each subject may singularly knot his psychic structure, or form a social bond with the Other. In such a clinic, the Name-of-the-Father is merely one form of the sinthome. The Name-of-the-Father is merely an especially stable form of knotting. Lacan gave us an indication of this in the introduction of the four-ringed Borromean knot in Seminar XXII: R.S.I., where Lacan identifies the fourth ring as “psychic reality,” which—for Freud—he identifies as the Oedipus complex. In the next Seminar, this fourth ring is generalized to the sinthome, the Name- of-the-Father one form of it. While this latter clinic supplants the clinic of foreclosure, it does not invalidate it. The stability of the Name-of-the-Father as a sinthome is such that it seems to have substance, rather than semblant. In neurosis, the stability of the structure is such that the logic of the clinic of foreclosure applies. Indeed, this relationship of the clinic of foreclosure to the clinic of the sinthome is not unlike the relationship between Newton and Einstein. Newton’s physics are valid within certain parameters of mass and velocity that are not too great nor too small. Newton’s physics is not useful in extreme values of those parameters, in the way that Einstein’s physics proved useful. However, while Einstein’s physics does thus supplant Newton’s, Newton’s physics is still valid in the limited parameters. In the same way, while the sinthomatic clinic covers a broader array of psychic structure with greater utility, the clinic of foreclosure is useful in certain parameters.

This clinic of the sinthome brings us a greater flexibility in our treatments with subjects with Ordinary Psychosis. In the clinic of foreclosure, the treatment is directed along the lines of signification, anchored in the Name-of-the-Father. Jouissance in this clinic is the imaginarized jouissance, as Miller has specified, a jouissance that is evacuated through the process of symbolization. In contrast, the clinic of the sinthome is organized along a direction indicated by Lacan’s lalangue, based on a direct linkage between signifiers and jouissance. While the evacuation of jouissance may be an issue at play in treatment, the treatment is not oriented only towards signification and the elimination of jouissance, but towards a linking of signification and jouissance. As Laurent specifies, this shift from the relation of S1 to S2 to the relation between S1 and object a is crucial in the clinic of Ordinary Psychosis. In many treatments, the quantity of jouissance remains intact (to use an old Freudian notion), but the psychotic finds new ways to manage his jouissance. A subject’s sinthome links a significatory identification to that subject’s objet a, a piece of jouissance, his semblant of being. With the sinthome, the subject does not eliminate the jouissance as such (often so destructive for the psychotic), but rather finds a way to make do with it. The sinthome is the point de capiton of lalangue for the psychotic.

The sinthome is nothing other than the social bond for the subject. In the case of neurosis, it is the sinthome as Name-of-the-Father structuring the Other, or in its Freudian reading, Oedipus rex ruling over society and the unconscious like the Aristotelian topos over discourse. But, in its most general form, the sinthome establishes the social bond. While the Other doesn’t exist, for each speaking being, there is a semblant of the Other. This is the Other the subject makes use of to engage the world, be it through the fantasies of neurosis or the most singular ways of the psychotic, those sinthomatic and semblantized structurations of the Other, so a-typical, reigning over the Other—the A-topos rex. In this situation, the analyst has considerable latitude to assist the psychotic subject to make use of an Other that will work for the subject, an Other specific for the subject’s sinthome. This process of elaboration of a semblant of the Other for the psychotic subject constitutes the other level for the direction of the treatment. In some of the most striking cases presented in the Paris English Seminar on “Ordinary Psychosis,” we heard just this process described variously as “creating his own personal myth,” “creating a bond with the Other,” “creating a symbolic matrix that gave him a possibility of negotiating in the world,” “allowed her to enter into the discourse of the Other,” and “built a family romance.” Indeed, it is fully the desubstantialization of the Other into a semblant that has created not only the perspective of a new diagnosis for psychosis, but a new horizon of possibility in treatment.