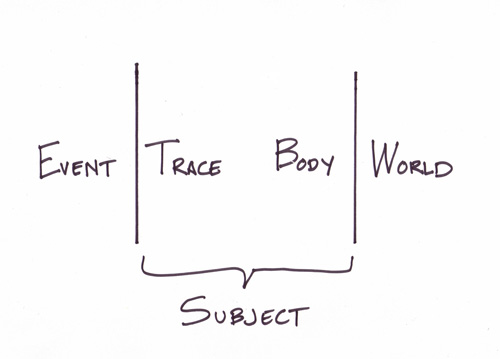 My Father was accustomed to say, "we must begin by the beginning."  So, I must begin this lecture about the subject of art by its beginning.  But, what is this beginning?  I think we have to begin with the oldest question—the question of being, the question of being as being, of being qua being.  What is being?  What are we saying when we say something is, something of art is…?  Something of art is a joy forever, for example.  What are we saying?  I begin by a fundamental distinction between three levels of the signification of being.

And so we have to understand the relation between the three levels, the relation between being qua being (pure multiplicity), existence (multiplicity but in a world, here and now), and happening or event.  And so we can see that in a concrete situation we have, finally, two terms: first, a world, a world situation—something where all things exist; and after that, an event, sometimes, an event—which is something which happens for this world, not in this world, but for this world.  And I call a subject 'a relation between an event and the world.'  Subject is exactly what happens when as the consequence of an event in a world we have a creation, a new process, the event of something.  And so we have something like that.  It's something like in a protest…

So when you have to speak of the subject of art you have to speak about a lot of things.  First, what is a world of art?  What is a world for artistic creation?  It's not the world in general.  It is a specific world for the artistic creation… ah! the police.  So this is the first question.  The second question is—what is an artistic event?  What is the new singularity in the development of the art world?  Third, what is a trace?  What is the trace of an event in the art field?  And after all that—what is the construction of the new art body?

The second one, the second paradigm is an idealistic, theological, metaphysical philosophy of the subject.  The subject can be completely separated from its body.  In the first paradigm the subject is finally the body itself.  In the second paradigm, the subject is completely separated from its body; it is against the subject as subject for enjoyment, the revival of a profound desire of separation, the desire of existence of the subject as separated of its body.  The goal is to find—in life, in action—the point where the body is only the instrument of the new separation.  And you see, it is not experimentation of death in life as in enjoyment, but it's assumption of a new subjective life by the mean of death itself.  So we can say that that sort of subjective paradigm is experience of life in death, which is opposed to the experience of death in life.  And we can name sacrifice that sort of subjective experience of life in death.

We have three possibilities of relation between a subject and its body.  Three possibilities.  And so, we have three possibilities for a subjective paradigm.  The first one—reducibility.  Reducibility.  The subject can be reduced to its body.  We can say that we have, in that case, an immanent identity of the subject, immanent identity because there is no separation at all, but complete identification between the process of the subject and the becoming of its body.  In that case the norm—the final norm is enjoyment, the experimentation of death in life.  The second is separability.  Separability… The subject can be separated completely from its body. There is, in that case, transcendent difference, transcendent difference because the subject experiments itself in the transcendent world and not in the sacrifice of its proper world.  The third possibility that I propose is something like immanent difference, not immanent identity, not transcendent difference, but immanent difference.  In that case, the subject is not reducible to its body, so there is something like an independent subjective process.  There really is a creation, which is not reducible to the experimentation of the limits of the body.  But it's impossible that there exists some separation between the subject and its body.  So there is neither separation nor reducibility.  And that is the situation of the subject when we can understand it as a process of creation, a process of production, a process, which really organizes the relation between the trace of an event and the construction of a new body in the world.  And so we have to find something which is not in the field of the contemporary war between enjoyment and sacrifice.  And I think the question of the subject of art is today this question—to find something like a new subjective paradigm, which is outside the contemporary war between enjoyment and sacrifice.  And we have a lot of problems to organize in this new paradigm—a new paradigm, which has to understand completely how a new body can be oriented by a subjective process without separation and without identification.  So we have to maintain the distance between the trace of an event and the construction of the body.

First one, first problem—if really the subjective process as a process of creation is in the field of a distance (but an un-separated distance) between the trace and the body we have to interpret the event as an affirmative one and not as a purely disappearing or transcendent thing.  If really the trace of the event is in the constitution of the subject, but not reducible to the body, we have to understand that an event, a real event is something affirmative.  And it's a complex question because certainly there is a sort of disappearing of the event, and event is a split, a break of the law of the world.  So what is the relation in a real event between the negative dimension—rupture, break, split, as you want—and the affirmative necessity if really an event is not absolute and real event?  So we have to think of an event, and for example, of an artistic event, as something like an affirmative split.  It's the first problem.

The third problem is—what is the constitution of the new body?  Because naturally we have in the case of the subjective process something like the new body.  Only a new body is in the possible disposition to have something new in the creation in relation to the trace of the event.  The trace of the event is not reducible to the body, but the body is not reducible to the world.  Once more, once more.  (showing figure)  You can see that if the subjective process is really in the distance of the trace and the body, we have to interpret the construction of the body as the new body because if the body is not the new body it is completely in the world and it's not in relation, in complete relation to the trace of the event as an affirmative split in direction of the world.  So the third problem is—what is a new body in the world?  What is a new composition of multiplicities?  What is really something, which is the support of the subjective process, the support of a trace?  That is the third problem.

So our five problems are: event as an affirmative split. What is exactly the trace of an event? What does the constitution in the world of the new body mean? How can we accept the discipline of consequences? And what is an immanent infinity?  And that is the questions we have to solve to say something about the artistic subject.

And the very interesting problem is the final problem: what is, in all that, the immanent infinity?  What is the creation, in an artistic subjective field, of a new existence of infinite?  I think in the artistic field the immanent infinity is finally something like the infinity of the form itself.  And what is infinity of the form itself?  It's the possibility that the new form—the new possibility of the form—is in relation, in direct relation with the chaotic sensibility.  And a new form is always a new access, a new manner, a new entry, a new access in the chaotic of sensibility.  And so we can say that in the artistic field the creation of forms is really the movement of immanent infinity, is really an access of the infinity of the world as such.  And so we are really in the development of a new tendency, so, of a new body in the artistic field, something like a new development of immanent infinity.  It's not only something else; it's a new manner of thinking of the infinite itself.  And it is why it is very important today to have something like new artistic experimentation because I think that the political question today is very obscure.  I was saying that our problem is to find something which is not in the field of the war between enjoyment and sacrifice, to find something which is really a third subjective paradigm. I think that is the specific responsibility of artistic creation—this search—because often when political determination are obscure artistic determinations clarify the situation.  And so as a philosopher, I can say to you (and I think a number of you have a relation to the artistic world, the artistic field) there really is today a specific responsibility of artistic creation, which is to help humanity to find the new subjective paradigm.  So the subject of art is not only the creation of a new process in its proper field, but it's also a question of war and peace, because if we don't find the new paradigm—the new subjective paradigm—the war will be endless.  And if we want peace—real peace—we have to find the possibility that subjectivity is really in infinite creation, infinite development, and not in the terrible choice between one form of the power of death (experimentation of the limits of pleasure) and another form of the power of death (which is sacrifice for an idea, for an abstract idea).  That is I think, the contemporary responsibility of artistic creation.  Thank you.

© lacan.com 1997/2005
Copyright Notice. Please respect the fact that this material in LACAN.COM is copyright.
It is made available here without charge for personal use only. It may not be stored, displayed, published, reproduced, or used for any other purpose.