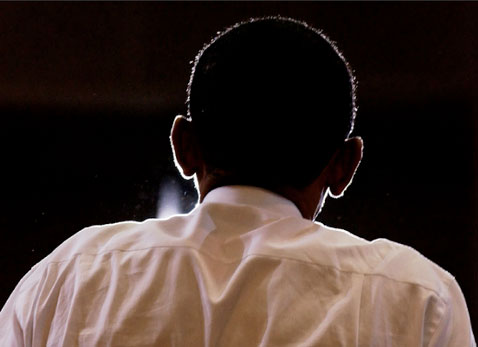 Days before the election, Noam Chomsky told progressives that they should vote for Obama, but without illusions. I fully share Chomsky’s doubts about the real consequences of Obama’s victory: From a pragmatic-realistic perspective, it is quite possible that Obama will just do some minor face-lifting improvements, turning out to be “Bush with a human face.” He will pursue the same basic politics in a more attractive mode and thus effectively even strengthen U.S. hegemony, which has been severely damaged by the catastrophe of the Bush years.

There is nonetheless something deeply wrong with this reaction — a key dimension is missing in it. It is because of this dimension that Obama’s victory is not just another shift in the eternal parliamentary struggles for majority with all their pragmatic calculations and manipulations. It is a sign of something more. This is why a good, American friend of mine, a hardened Leftist with no illusions, cried for hours when the news came of Obama’s victory. Whatever our doubts, fears and compromises, in that moment of enthusiasm, each of us was free and participating in the universal freedom of humanity.

What kind of sign am I talking about? In his last published book The Contest of Faculties(1798), the great German Idealist philosopher Immanuel Kant addressed a simple but difficult question: Is there true progress in history? (He meant ethical progress in freedom, not just material development.) He conceded that actual history is confused and allows for no clear proof: Think how the 20th century brought unprecedented democracy and welfare, but also the Holocaust and gulag.

Nonetheless, Kant concluded that, although progress cannot be proven, we can discern signs that indicate progress is possible. Kant interpreted the French Revolution as a sign that pointed toward the possibility of freedom: The hitherto unthinkable happened, a whole people fearlessly asserted their freedom and equality. For Kant, even more important than the — often bloody — reality of what went on in the streets of Paris was the enthusiasm that those events engendered in sympathetic observers all around Europe:

The recent Revolution of a people which is rich in spirit, may well either fail or succeed, accumulate misery and atrocity, it nevertheless arouses in the heart of all spectators (who are not themselves caught up in it) a taking of sides according to desires which borders on enthusiasm and which, since its very expression was not without danger, can only have been caused by a moral disposition within the human race.

One should note here that the French Revolution generated enthusiasm not only in Europe, but also in faraway places like Haiti, where it triggered another world-historical event: The first revolt of Black slaves, who fought for full participation in the emancipatory project of the French Revolution. Arguably the most sublime moment of the French Revolution occurred when the delegation from Haiti, led by Toussaint l’Ouverture, visited Paris and was enthusiastically received at the Popular Assembly as equals among equals.

Obama’s victory belongs to this line; it is a sign of history in the triple Kantian sense ofsignum rememorativum, demonstrativum, prognosticum. That is, it is a sign in which the memory of the long past of slavery and the struggle for its abolition reverberates; an event which now demonstrates a change; a hope for future achievements. No wonder that Hegel, the last great German Idealist, shared Kant’s enthusiasm in his description of the impact of the French Revolution:

This was accordingly a glorious mental dawn. All thinking beings shared in the jubilation of this epoch. Emotions of a lofty character stirred men’s minds at that time; a spiritual enthusiasm thrilled through the world, as if the reconciliation between the divine and the secular was now first accomplished.

Did Obama’s victory not give birth to the same universal enthusiasm all around the world, with people dancing on the streets from Chicago to Berlin to Rio de Janeiro? All the skepticism displayed behind closed doors even by many worried progressives (what if, in the privacy of the voting booth, publicly disavowed racism reemerges?) was proven wrong.

There is one thing about Henry Kissinger, the ultimate cynical Realpolitiker, that strikes the eye of all observers: How utterly wrong most of his predictions were. To take only one example, when news reached the West about the 1991 anti-Gorbachev military coup, he immediately accepted the new regime (which ignominiously collapsed three days later) as a fact. In short, when socialist regimes were already a living dead, Kissinger was counting on a long-term pact with them.

The position of the cynic is that he alone holds some piece of terrible, unvarnished wisdom. The paradigmatic cynic tells you privately, in a confidential low-key voice: “But don’t you get it that it is all really about (money/power/sex), that all high principles and values are just empty phrases which count for nothing?” What the cynics don’t see is their own naivety, the naivety of their cynical wisdom that ignores the power of illusions.

The reason Obama’s victory generated such enthusiasm is not only the fact that, against all odds, it really happened, but that the possibility of such a thing to happen was demonstrated. The same goes for all great historical ruptures. Recall the fall of the Berlin Wall: Although we all knew about the rotten inefficiency of the Communist regimes, we somehow did not “really believe” that they will disintegrate. Like Kissinger, we were all too much victims of cynical pragmatism.

This attitude is best encapsulated by the French expression “je sais bien, mais quand meme” (I know very well that it can happen, but nonetheless… I cannot really accept that it can happen). This is why, although Obama’s victory was clearly predictable at least for the last two weeks before the election, his actual victory was still experienced as a shock. In some sense, the unthinkable did happen, something that we really didn’t believe could happen. (Note that there is also a tragic version of the unthinkable really taking place: holocaust, gulag… how can one really accept that something like that could happen?)

The true battle begins now, after the victory: The battle for what this victory will effectively mean, especially within the context of two other much more ominous signs of history: 9/11 and the financial meltdown. Nothing was decided by Obama’s victory, but his victory widens our freedom and thereby the scope of our decisions. But regardless of whether we succeed or fail, Obama’s victory will remain a sign of hope in our otherwise dark times, a sign that the last word does not belong to “realist” cynics, be they from the Left or the Right.