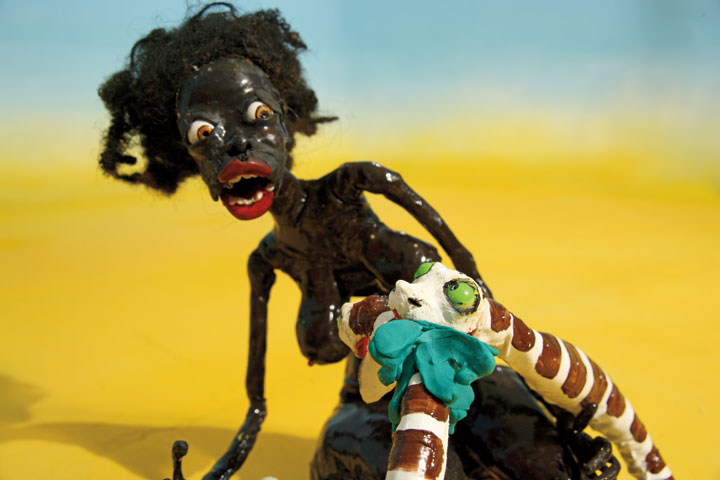 I put on big shoes, too big, so big that my feet appear to be men’s feet; me standing in the hallway, him, no sign of showing me in. And he looks and looks at my shoes, he rolls his eyes, he sighs, I follow him.
— Shshsh… shoes… Oh! shsh… it certainly identifies you… Pasa un angel, An Angel Passes when all of a sudden the conversation stops… I didn’t know it had this meaning in English… I mean the title of your book… did you translate it from the French?
— (Silence, while the best of his stone faces; it could be that he was even impatient…
(……)
— Silence in the Other… a hole… a robe?… we know silence invests certain people…
(Why is he going to smoke and I can’t?)
Me — Do you have a light?
Him — No!
(……)
Him — What else?  His elbow on the armchair, his head on his fist, his eyes half closed as if about to sleep. (Had I been left with nothing to say? I became impatient, time was so ephemeral, so expensive…)
— I have no words… I don’t know what to say.
Him — Invent…
— I can’t, I can’t, I can’t… (The session was going to be left at that? he was already clapping his hands!)
— OK! I said, as we proceeded to go through the retirement ritual: coat, gloves, scarf, hat, with an awkwardness that evidenced my hate. He had no pity.
— Ready?  Already in the hall, already in front of the mirror between the elevator doors, what did I see? In a circle, spinning around my head, these last words drew themselves in front of my eyes — I can’t; I can’t, I can’t… the penmanship corresponded with that of a nine or ten year old girl. A girl I say? Of a girl that practiced penmanship and she did it in English…

— I dreamt of myself jumping into the void; I was standing on grass at the edge of the Earth; I hesitated… I was afraid but I jumped. I was falling and as I fell, between my hands a pillow… I leaned my head on the pillow… I continued to fall… the falling became pleasant… I woke up.
Him — Fall…
— Well, in English, you fall in love, also in French, but this time it seemed I was falling into myself.
(……)

(Such ado he makes when I put on men’s shoes, but the day I finally wear high heels he doesn’t even look at them…) I took off my coat, the gloves, the scarf, the hat… he was looking through the window; was it perchance that he wanted to comment that the fog had clouded over his East River. To talk about the weather with him, to bring him a piece of gossip, to talk!… I checked the back of his head, naive, even though immutable, somewhat curly.)
— Do you want to lie down?  (Hmm, it was all I wanted, but… too much too soon?)
— Next time…

In dreams I was pulling out a fly’s wings and then sticking them on the window angled at various heights. I looked through the wings of the fly; they had the exact shape of your glasses…
Him — aha
His eyes, my eyes? my father’s eyes?
Only five years later I would realize my analyst’s eyes were not blue. It took weeks to tell him about it, and then weeks to believe myself. 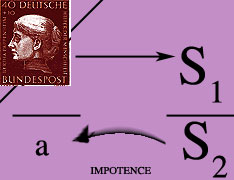 The beginning of analysis should hysterize the subject. Hence, hysterical or not, the obliged path will set forth division: Supposed Knowledge incarnates an Other. The subject will appear in this Other. Intrinsically internal, hence doomed to fall, the analyst — the Other — objet a — will solely reveal itself in retroaction Why? because there isn’t The analyst.

Lacan puts it this way: il n’y a pas du psychoanalyste . Should we then conceive of this semblance, of this non-determined one, the way Lacan word-paints woman — non-existent — non-whole — divided to herself? Like the woman, the psychoanalyst will oppose himself — in order to be.  Analysis begins with the Master discourse. Love will sign the change into the Analytic discourse:

The S1 — le parlêtre — a word represents the subject. In as much as the analysand speaks about whatever crosses his mind, that he speaks non-sense — words lose their meaning. So in analysis his speech goes in the place of truth. Where, what, is the place of truth? There are four places in the structure:

Written at the place of truth, S2 is a representation of the Supposed Knowledge of the analyst. In contrast to the analysand’s “sayings,” there are no “sayings” of the analyst. There is only the “saying” of interpretation.

S2 supports objet a. Embodied by a semblance of objet a, a fall-out from the concurrence of S1 —> S2, the analyst (again like the woman) is in fact introduced through the saying of truth. For in acting as if he understood, he rides full tilt against the unconscious.

The function of objet a — the analyst, is silence. Although extended into being there (être là), Lacan finished up writing it as être l’a: to be a.

Hence Lacan differentiates the uttered, from the mid-saying. “In as much as the analyst’s silence corresponds to a semblance of a leftover (objet a) he intervenes at the level of, that is of the conditioned, 1) because of what he utters, 2) because of what he does not say.”[3] This relation graphs as follows:

In Encore we have the story of the parrot and Picasso. Lacan says she was in love with him. Why does he say this? It seems that this parrot nibbled at Picasso’s shirt, and at the lapels of his jacket. In fact, the parrot was supposedly in love with what is essential in man, his attire. “Clothing loves the monk for together they make but one.”[4] Then the body under the clothing — a leftover of desire — is what defines object a.

So the image, and a substance — objet a — the leftover of the desire, is in turn its cause and its sustainer. Word for word, in remitting to the cause, the parrot — “what he utters” — is conditioned as the divided subject — $. And this makes for love’s unsatisfaction, for its “impossibility.”

However, uncertain forms on bodies identify sexual traits and grant the sexual being. But the being of it, which is none other than the enjoyment of it, jumps into another body. And the body of jouissance is a-sexuated. Why? because sexual jouissance is determined, marked by the impossibility of establishing the relationship of the two sexes in the utterable.

So for Lacan, “analytic discourse shows that… to the man — provided that he has the organ said phallic — woman’s sex means nothing, be it not through the mediation of the body of jouissance.”[5]

Then, for a woman? According to Schneiderman there is a conflict between signifiers and the female body: “…the relation in question does not concern men and women but signifiers and women… The signifier is a fallen angel. Its crime is to be the unmoved mover of a woman.”

The analyst’s attention floats, the patient free associates. Torn between the Real — the body, jouissance — and the Symbolic — language, desire — the speaking being will thus not say — S1, unless he utters. S1 leads to recognition in the matter of failure. “Dependent but of the essence of the signifier, there is a gap between this One and something which depends on the self, and in pursuit of the self, of jouissance.”[6]

The analyst gets distinguished from the Other. Objet a contains the Other, but it exceeds it. S1, identifies to truth, and S2, to knowledge. The speaking being knows more than what it speaks, . The Analytic discourse introduces a semblance of jouissance.
S1 — countable and actual, the One is in addition to…
S2 — the others, are infinite and virtual. Although the infinite set will only consist as such in virtue of a missing signifier which is external to it, S2 will consist only if S1 ex-sists.

Still, we may question the jouissance of Woman “supplementary… beyond the phallus… in excess.”[7]