There is no sexual relation
Josefina Ayerza 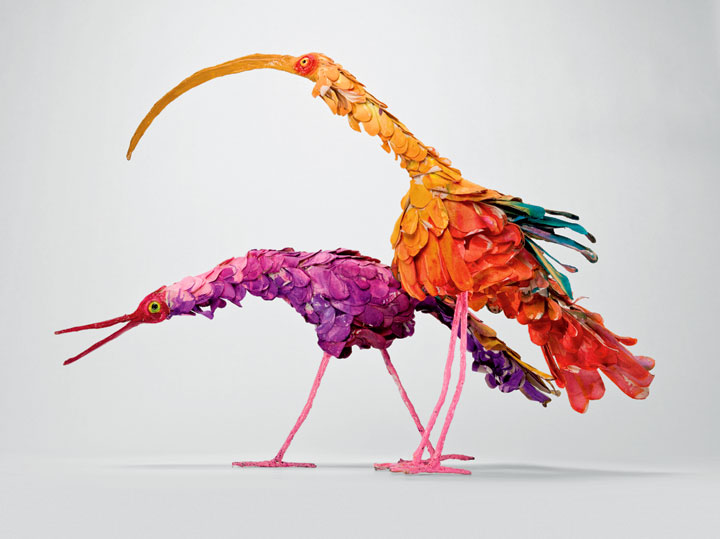 Psychoanalysis, according to Jacques Lacan, is founded in a principle announced as:
“There is no sexual relation.”
It’s corollary, or another way to phrase it is: “Jouissance is impossible.”

Lacan is already in pursuit of this idea in Seminar XI… and this is 1964.
He brings up the matter by saying that something that breaks apart is in turn splitting the being. The actual being will then accommodate itself to the certain bipartition, even in the natural world.

Call it mimicry, what it implies is that the being breaks up, be it in the sexual joining, or in the struggle to death. So the split comes about between “its being and its semblance, between itself and that paper tiger it shows to the other. In the case of display, usually on the part of the male animal, or in the case of grimacing swelling by which the animal enters the play of combat in the form of intimidation, the being gives of himself, or receives from the other, something that is like a mask, a double, an envelope, a thrown-off skin, thrown off in order to cover the frame of a shield.”

The being that comes into play: it is this separated form of himself that takes over against the effects of life and death. It is with the help of this doubling of the other, or of oneself, that the renovation of beings proceeds in reproduction.

The lure plays in reference to the attraction to the other pole:
you picture the lion, grimacing swelling… you know how the lion will go on and mark its territory… He’ll pee around it, make it into a circle. And can’t we picture the men, grimacing swelling, even marking their territory…?
Meanwhile woman devotes herself to the jouissance of her own body, as she realizes that even in solitude she is looked at by another…
Lacan adds a mysterious phrase “As conjoining masculine and feminine, we apprehend the prevalence of what is presented as travesty…”
“Through the mediation of masks, the masculine and the feminine meet in the most acute, most intense way.” 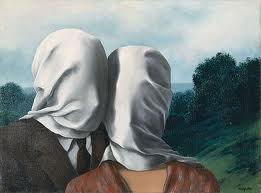 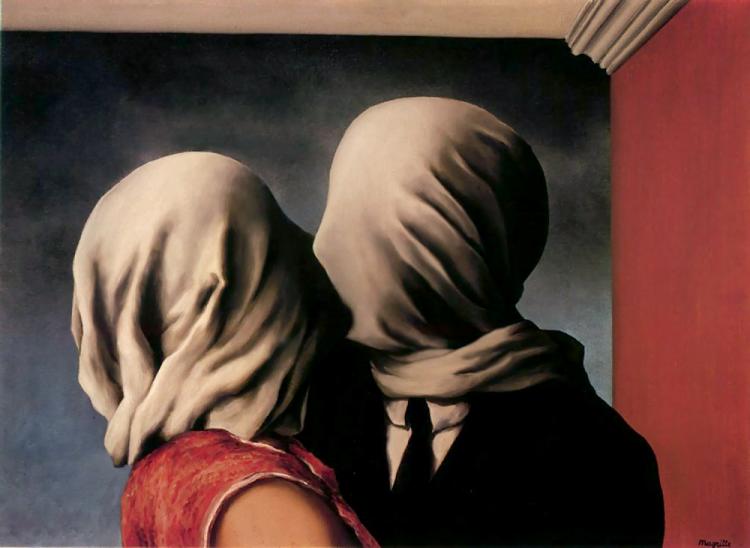 René Magritte – The Lovers I & II,

“Only the subject—the human subject, the subject of the desire that is the essence of man—is not, unlike the animal, entirely caught up in this imaginary capture.”
And Lacan will continue to say, “He isolates the function of the screen and plays with it. Man knows how to play with the mask, as that, beyond which, there is the gaze.” Here the locus of mediation is the screen.

All about an Other… too directly exposed to the obscure abyss of this Other, how are we to deal with the anxiety-provoking encounter of this Other’s desire?

The question is Qui voi??? What do you want of me? 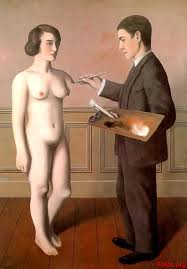 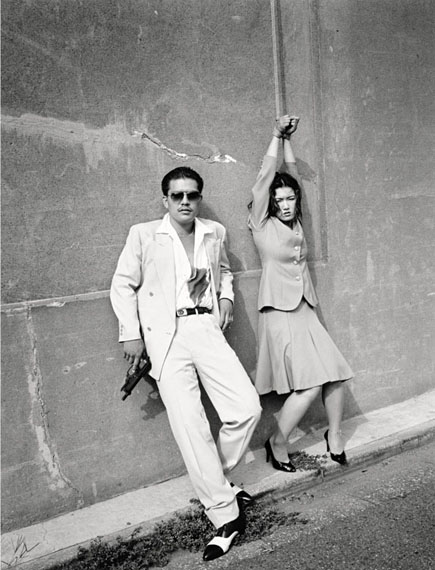 The fantasm provides an answer to the enigma of the Other’s desire. Again, it teaches us how to desire. The fantasm does not mean that, when I desire a lemon crèpe and cannot get it, I fantasize about eating it; the problem is rather, how do I know that I desire a lemon crèpe in the first place? This is what the fantasy tells me. This role of the fantasm hinges on the deadlock of our sexuality designated by Lacan in his paradoxical statement “there is no sexual relationship.” That is, there is no universal guarantee of a harmonious sexual relationship with one’s partner.

Slavoj Zizek has the best example, on which we commented at the Seminar, some of you might have heard it: A couple of years ago, a charming publicity-spot for a beer was shown on the British TV. Its first part staged the well-known fairy-tale: a girl walks along a stream, jumps, sings, sees a frog, takes it gently into her hands, kisses it, and, of course, the repulsive frog miraculously turns into a handsome young cowboy prince.

But the story isn’t over yet: the handsome man casts a greedy glance at the girl, draws her towards himself, hugs her, kisses her—and she turns into a bottle of beer, which the man holds triumphantly in his hand.

From the side of the woman, the point is that her love and affection (signaled by the kiss) turns a frog into a beautiful man—a full phallic presence; from the side of the man, it is to reduce the woman to a partial object, the cause of his desire—an objet petit a.

On account of this asymmetry, there is no sexual relationship: we have either a woman with a frog or a man with a bottle of beer. What we cannot obtain is the natural couple of the beautiful woman and man: the fantasmatic support of this ideal couple would have been the figure of a frog embracing a bottle of beer.

2 fantasies, each of the two subjects is involved in his or her own subjective fantasm: the girl fantasizes about the frog that is a handsome man, the man about the girl who is a bottle of beer.

Love comes to compensate for the lack of sexual relation, says Lacan.
However love, as a supplement cannot exist in the same structure.
Love can only come to be as chance.
Love belongs to the order of the event.
Different from the desire, love as love goes directly to the complete individual, whole.

What modern art and writing oppose to this is not objective reality but the objectively subjective, that is the underlying fantasms which the two subjects are never able to take on, something alike a painting of a frog embracing a bottle of beer, with a title “A man and a woman” or “The ideal couple.”

In today’s art scene, the real does not return primarily in the guise of the shocking brutal intrusion of waste objects, sick bodies, mutilated corpses… The art issue with these objects is that they are out of place—still in order for them to be out of place, the empty place should be there in the first place. This place is rendered by minimalist art, starting with Malevich, and continuing with Donald Judd—this artist’s empty spaces so very empty… inside a box, alike the gallery. 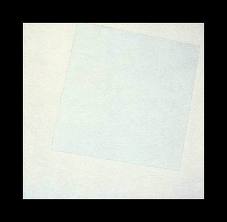 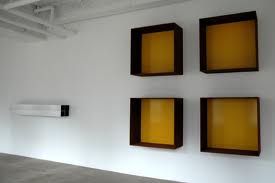 The underlying notion in Duchamp’s elevation of an everyday common object into a work of art, is well taken up by Warhol in that being a work-of-art is not an inherent property of the object. It is the artist himself who, by locating the object at a certain place, empties it—makes it a work-of-art. Being a work-of-art then is not a question of “why” but “where.” What Malevich’s minimalist disposition does is simply render—or isolate—this place as such, an empty place, a frame, with the magic property of transforming any object that finds itself within its scope into a work-of-art.

There is no Duchamp without Malevitch?
The Real in contemporary art has three dimensions, which somehow repeat the imaginary-symbolic-real triad within the real. The real is first there as the anamorphic stain, the anamorphic distortion of the direct image of reality—as a distorted image, a pure semblance that “subjectivizes” objective reality. Then the real is there as the empty place, as a structure, a construction that is never actual or experienced as such but can only be retroactively constructed and has to be presupposed as such—the real as symbolic construction.

Finally, the real is none other but the object out of place. Again the very real, if isolated, is a mere fetish whose fascinating/captivating presence masks the structural real. These three dimensions of the real result from the three modes by which one can distance oneself from ordinary reality: because you submit this reality to anamorphic distortion; you introduce an object that has no place in it; and you subtract or erase all content of reality, so that what remains is the very empty place that these objects were filling up.

The association with the famous surrealist dead donkey on a piano from Un Chien Andalou by Luis Buñuel, with the Diary of a Chambermaid… Jeanne Moreau, is paragon. Surrealists also practiced such over-identification with inconsistent fantasies. In other words, they staged fantasies, which are radically de-subjectivized, which cannot ever be assumed by the subject…

Do we not encounter a clear case of masculine phallic-jouissanceof the drive and feminine jouissance of the Other in Lars von Trier’s Breaking the Waves? Confined to his hospital bed, Jan tells Bess that she must make love to other men and describe her experiences to him in detail—this way, she will keep awake his will to live. Although she will be physically involved with other men, the true sex will occur in their conversation. Jan’s jouissanceis clearly phallic, as he uses Bess to provide him with the fantasmatic screen that he needs in order to be able to indulge in his jouissance, proper, while Bess finds jouissance at the level of the Other (symbolic order), that is, in her words. The ultimate source of satisfaction for her is not the sexual act itself (she engages in such acts in a purely mechanical way, as a necessary sacrifice) but the way she reports on it to the crippled Jan. Bess’ jouissance is a jouissance “of the Other” in more than one way: it is not only jouissance in words but also (and this is ultimately just another aspect of the same thing) in the sense of utter alienation—her enjoyment is totally alienated/externalized in Jan as her Other. That is, it resides entirely in her awareness that she is enabling the Other to enjoy.

With Jacques-Alain Miller, from the point of view of jouissance, the difference between perversion and hysteria is for the case not essential. In perversion, substitution is live, it is fully displayed and it is conscious: the subject knows what he is seeking, he knows what the action required is, the object he needs in order to enjoy. In hysteria, by contrast, this is unconscious. In order to find the sexual signification function, one must go through the detour of the interpretation of the symptom. But, aside from this difference regarding consciousness and unconsciousness, in both cases we are dealing with substitutive jouissance.

Love remains, concludes Miller. Love, which Lacan does not tear from its imaginary root when he says of the actual love, that it creates the illusion of a sexual relation. This is what properly distinguishes jouissance and love. There is a jouissance in talking about love, in experiencing love, in writing love letters—or emails, obviously. This jouissance is at the same time the most distant and the closest one, topologically, to the sexual relationship that does not exist.

“There is no sexual relation” was originally delivered as a speech at PULSE 2011.