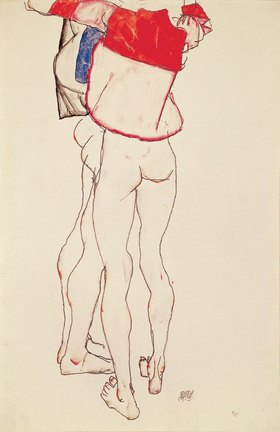 The women on the cover of lacanian ink 17 exist in the world of fiction that recreates their “secret celebration.” They are for real, not their celebration however. The very aesthetical, starts up from jouissance, so much jouissance is the core of the æsthetical. “They are preparing their orgasm,” says Pieter Schoolwerth—jouissance deriving from a structure of bliss, without necessarily thwarting the real. 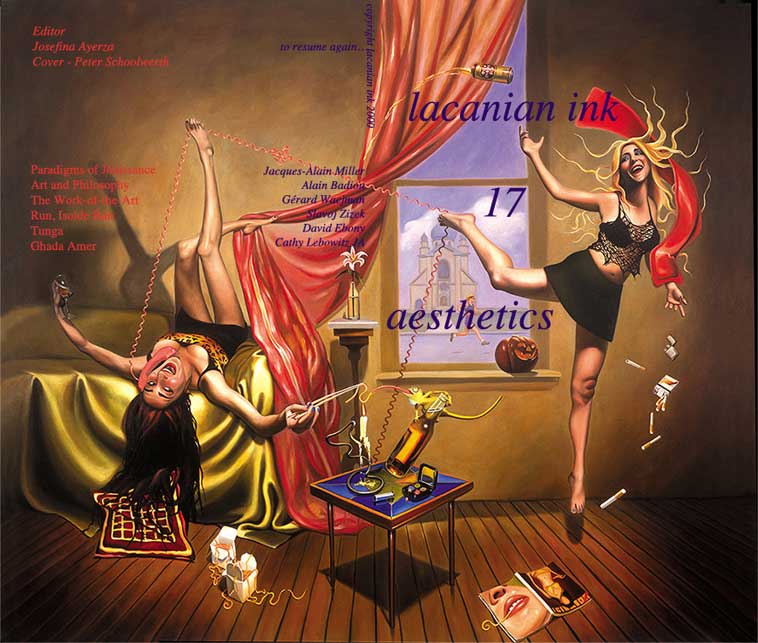 Jacques-Alain Miller’s six paradigms trace the concept of jouissance throughout Jacques Lacan’s teachings of twenty consecutive years, from the 1950’s to the 1970’s. Here the body looms once more toward a Lacanian perspective. You have a body that talks. And this body jouit…The imaginarisation of Jouissance, first movement in the progression, renders communication as the essential satisfaction, “conceived as inter-subjective and dialectical…” However, in reaching the sixth movement jouissance overtly finds the place for itself, by itself, alone. Jouissance One can be phallic, it will together be the One-jouissance, glaring, flagrant, by virtue of the non-rapport.

With Alain Badiou, art and philosophy are coupled in the guise of a symptom—that oscillates, that throbs…the way the Hysteric and the Master make for a discourse in Lacan. Art, thus identified with the subject, is the one to lean forward, in the name of truth, as if in search of its identity. For sure the master can never tell, its knowledge put to question in the very act of his reply. What remains is that art produces truths, philosophy exposes them, thereby bearing witness to their own time…in turn Badiou’s time, bearing witness to democracy’s endeavor, “The times are more worthy than the ‘democracy’ they take pride in.”

Well known after his writings on hysteria Gérard Wajcman’s article “The Work-of-the-Art,” takes on the discourse of art from the side of the feminine. A non-existant stand, the supplementary already in the title, art as a whole is not a consistent notion. “This equation seems to me to lay stress on the multiple essential, a flocculation of art, a reiterated production, on the abatement of every object.”

Slavoj Zizek’s article undertakes the perception of our “true” reality as tangled in “possible” outcomes. Not simply cancelled, the possible haunts reality as the specter of what might have happened. He ventures that the new technology, while certainly capable of expressing this “objective correlative,” finds its precursors in older forms. “Run, Isolde Run” after Tom Tyker’s Run, Lola Run, starts out from the well known story of Isolde: she runs to find a dying Tristan and so dies, of love, herself. Three alternative stories ensue…Now it will be King Marke to run after her, forgive the lovers, who live happily thereafter; now Isolde and Tristan run into murdering King Marke, but cannot find fulfillment in the shared death and are condemned to live forever; now Isolde doesn’t run, she instead stays with her husband, and Tristan dies...

When David Ebony begins his piece, “It may seem an unlikely pairing of the academic and the exotic...”, he announces his task of elucidating the common explorations of the English critic and theorist Terry Eagleton, and Brazilian sculptor and performance artist Tunga, whom at first glance appear to be in æsthetic opposition. We see that beyond the categorization of their respective backgrounds, their examinations and inquiries, “what culture is” in the writer’s case, and “what culture does,” in the artist’s case, reflect a common task while their work anticipates the direction of culture itself.