What is a picture? 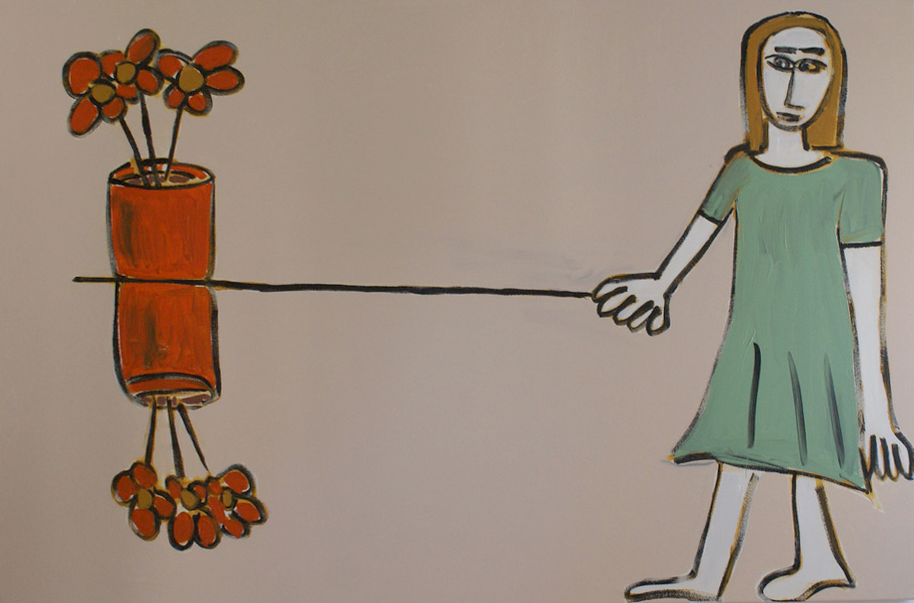 A minus sign followed by the Greek letter phi in lower case, the algorithm (-φ) should elucidate the attributes of the picture which is you. Yet evasive in its function of constituting the objet a, a return of the object which may take different contours, the actual algorithm symbolizes an imaginary lack “central to desire.”

A return of the object in the real? The outcome takes fantasy to single out the lack before being followed by the same Greek letter phi, now in upper case (-Φ), identifying its symbolic character. Indeed a word, though a phallus, the symbolic account is thus empty. Yet structural in its function of conveying desire, the phallic signifier takes in the status of an objet a because it exceeds the Other, “…in you more than you.”

Your desire is not your own but the desire of an Other. If it needs to be staged it is because you may want to recognize this desire as your own. Fantasy conveys the image, its particular lack eliminating the subject in the actual scribble of a word, “…something appropriates the gaze to the function to which it may be put in the symbolic relation in man.”

What is prior to the word? The eye and the gaze split: you may only look out from a spot in space, but you are looked at from everywhere else.

What you see…Once you see, you’ve stopped looking. In the sense that while you look you are trying to find something, watching is what prompts the instant that may hold the eye on the uncovered object. But what if this object is hollow? An inversion happens: the detour around the hollow object—in behalf of drive—conveys the knowledge of a prevenient possession, lost. Latent in the subject, loss prevails on jouissance. Drive: the subject gets soaked up by the actual objet a in the seeing act.

The subject that is an object, that is the gaze, is outside: you are looked at, you are the picture. Lacan’s sardine-tin story throws light on the issue of the “all-seen” subject, now splitting in search of itself, now diving, now reduced to zero.

In this little anecdote Lacan happens to be in search of something different, “in the country, or at the sea.” So much so that from morning till night he finds himself sailing…on a tiny boat, in the midst of fishermen, parting from the local port. Brittany was not really industrialized at that point—there were no trawlers—and the fishermen went to sea in their own frail crafts, at great risk to themselves. “It was this risk, this danger that I loved to share.”

One day, while waiting for the moment to pull in the nets, Petit-Jean pointed out to Lacan something floating on the surface of the waves. It was a sardine can. Floating there in the sun, it was “a witness to the canning industry.” Petit-Jean said, “You see that can? Do you see it? Well, it doesn’t see you!”

We may guess that Lacan was already talking to these men about things they had never heard of before, but they seemed to understand more than what he expected. In saying this Petit-Jean was laughing. Not Lacan. Why? Because he understood that the can was seeing him, “…at the level of the point of light at which everything that looks at you is situated.”

What does Lacan mean by this point of light, and why would the event disturb him? The pattern of the fractured word pre-exists the being, already breaking up between itself and its semblance, between itself and the photograph it shows to the other. Thus the point of light embodying the gaze: “…I enter light and it’s from the gaze that…I am photo-graphed.”

In this picture there is Lacan, himself a rare object in the landscape—a sardine tin in the sea. Caught in metaphor, if the tin represents a devastating eruption of industry in the realm of nature, Lacan’s presence among those fellows earning their livings with great difficulty, “looked like nothing on earth.”

From the perspective of the subject, how Lacan looked at/from the can was not affected by the fishermen’s thoughts or feelings. His perception, in the Other, is but his own perception of himself. “In the depths of my eye the picture is painted, but the subject is not in the picture…if I am anything in the picture, it is always in the form of the screen…the stain, the spot.”

The notion of the stain comes back later in Encore, “…there where it talks, it jouis, but it knows nothing.” Two categories of thought: “la pensé,…it thinks you, le pensé,…it thinks of you.” 2

It, a stain, thinks you. If the work of art, like the signifier equated to an angel, is empty—in the sense that you are not supposed to eat Andy Warhol’s Campbell’s Soup, or clean the house with his Brillo pads—if the work of art thinks you, it is because it may hold you in its fold, for the stain/you to joui, there where it talks, but wants to know nothing.

From Louis Aragon, from Contre-chant, in the Fou d’Elsa:

That can reflect but cannot see

By your absence which makes them blind.