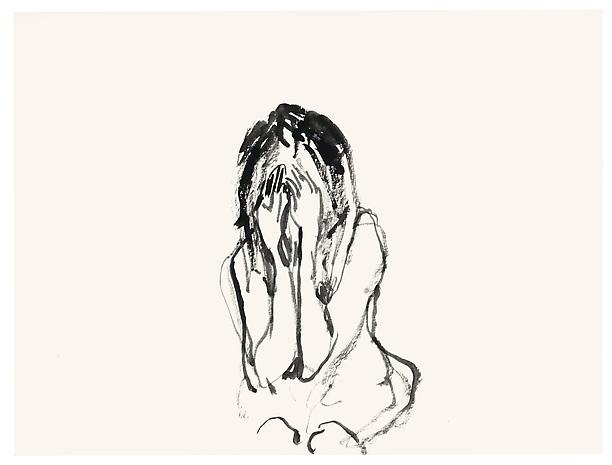 If masculinity can be best defined as the absence of female, a gender trope operating solely around exclusion, then men without women ( to pay homage to Papa, vulgar signifier of the ur-male) are the only ‘real’ men, all the rest fatally compromised by osmotic proximity to the opposite sex. Le Salaire de la Peur, the 1953 film by Henri-Georges Clouzot thus can be best read as a flickering text around the very missing signifier that is its core, the absent center around which it revolves, like an old 45. That void, that, indeed, hole is woman. The appeal of the film, whether in a re-released pristine print or American re-make, The Wages of Fear, is based on a central premise, that the complete exclusion of all female elements will produce a radical masculinity so extreme that it must border on the feminine, if not even become female, in the totality of their absence.

The essence of film is female. In its dream alogic, its nervous sublime, its slim surface of reflection, transparency and flow, its sheer improbability and dark magic is surely inherently Woman, not least in the easy womb analogies of cinema space itself. Films did not have to be by women as they are already, inherently, of them. If we had to gender the word, film would indubitably be, like a ship, She. Its masculine gender in French ‘le cinema’ is one of those odd reversals that only emphasize further its femininity, just as the slang word for the male sex has a feminine gender, la bite and the female sex is masculine, le vagin. In such linguistic gendering the definition of the sexes is by reversal and exclusion, the most female of all words, the vagina, is given a male prefix and thus is all the more female. Just as a film without women becomes a ‘Woman’s Film’ thus a word with a female gender can be all the more emphatically masculine because of it. Inclusion by exclusion and reversal by over-emphasis are paradoxical laws of gender.

Le Salaire de la Peur is popular with female audiences, perhaps because they can participate all the more completely in a narrative that entirely avoids the figuration of their own sex, and thus deals with their significance by overt absence. The erotic emphasis on the exceptionally young and good looking Yves Montand, a heroic Social Realist statue of Man as Man, is also a factor in its appeal to women and men. As in the photographs of Bruce Weber, Clouzot films Montand as a woman, or as women are normally built on screen, lit, posed, dressed and bathed in the luminous Otherness of the sexual object.

His white vest, closest sartorial signifier of maleness as the brassiere is to women, shines with that peculiar celluloid glow garments give off in close, tight proximity to sex flesh, a cotton cut-out of bodily perfection.

In the invisibility of women we have to concentrate, heterosexual or not, on Montand as sole embodiment of desire. The role is that of a sex star, the only oddity that it is played by man. A man who becomes our femme fatale by virtue of his screen exclusivity, his occupation of every frame, a narcissistic centrality we associate with the classic Hollywood Goddess, who obsessively holds the spotlight, that continual, shifting spotlight, the beam of the movie projector itself.

Considering the essentially female nature of film as medium it is hardly surprising that films entirely devoid of women are rare.

Lawrence of Arabia is an example of a film that creates a totemic symbol of independent masculinity by the entire absence of women (other than a shot of Bedouin women’s eyes, otherwise fully veiled, the slit in the veil suggesting the sex as a Third Eye) which finally suggests Lawrence’s own femininity, hereconstrued as the homosexual.

Whilst traditional cinema was always based around the woman, the last decade saw an increasing exclusion of female characters from the screen, as if to repress all traces of the feminine, to deny the ‘Womanliness’ of the medium, a repression that naturally led to the eruption of femininity in other sites. Indeed the whole phenomena of Super Models, those previously anonymous fashion magazine faces who slowly gained names and thus vast fame, occupies the abandoned arena of the cinema actress, the Hollywood woman-star.

The gradual process whereby these models came to be identified as the same face from one set of pictures to the next, then came to be known as Linda, Naomi or Cindy, exactly parallels the appearance of film stars in early Hollywood. The studios did not want their actresses to be known by name, that would increase their financial power, but they could not halt the inexorable nature of fame. The anonymous actresses started to be recognized from one film to the next, then they came to be known by their names, then they became stars, millionaires, the highest paid employees in the world. The Super Models followed exactly the same pattern, from anonymity to expensive exclusivity. It is no coincidence that their fame occurred at a time when Hollywood was no longer producing female stars. If Meryl Streep or Diane Keaton are the best Hollywood can provide it is not surprising teenage girls have gone elsewhere for icons of untouchable glamour.

But if films without women were a commonplace in 80s cinema, they were a rarity at the time Le Salaire de la Peur was made. Back then it was justified to ask, paraphrasing Lewis Carroll’s Alice, “ What is the use of a film without women or conversation ?”

Curiously the part was played by Clouzot’s wife, Vera, a genuinely exotic Brazilian, who subsequently acted in two other Clouzot films, most notably Les Diaboliques (1954) in which she died of a heart attack, as she was to do in reality six years later. Within the larger perversity of a director filming his wife as sex object Vera becomes Clouzot’s definition of the female, the symbolic woman, his personal standard for all that is Other.

Her physical attractiveness on screen is compromised by her ‘belonging’ to the director, being filmed as his own trophy, his private property boastfully displayed. Thus, though she is supposed to function as the object of Montand’s desire, his coded reward, there is a notable distance between them on screen, a lack of genuine erotic link, because she is owned so totally by the gaze of the director, her husband. Montand was notorious for his affairs with actresses he appeared with, pace Marilyn Monroe, but here the impossibility of sexual fulfillment off-set is set off by their coldness on screen. Vera may play the only woman but she is clearly uncommitted to her role as flirt, her supposed availability is only for her husband’s camera.

Soon after her brief appearance the plot begins in earnest, her appearances nothing more than footnotes to the central passage of the story, as if the sheer maleness of the main narrative requires a woman to top and toe it. The film is successful because so simple, a single idea that acts as engine for all subsequent suspense. The men have to transport deadly cargo in two separate trucks. It is a three-part race between them, time and their dangerous burden. Soon the theme, the essence of the film becomes the cargo itself, what they have to carry with them, what starts to become them. This essence is indeed ‘I’essence’, that significant French word for fuel. The trucks are filled with highly explosive nitroglycerine, what is repeatedly referred to as the most dangerous liquid in the world.

What they have to transport is in fact the essence of life, the most crucial and explosive fluid in existence, femininity itself.

Woman as fluid, liquid, water, dissolved and flowing matter is of course the most basic universal metaphor, an essentialist notion equally beloved of misogynist 19th century Symbolists and biological Feminists.

If femininity is a fluid, Montand and companions have the ultimate male task of trying to drive ( the Lacanian Drive?) this fluid without being destroyed by it, without being blown up from behind by the essence of Woman. This is the deadly adventure every man has to complete, the delivery of Womanliness to its destination (marriage, death, childbirth, what was it again that women want?) against the continual risk of losing one’s life, losing one’s Maleness, in the attempt.

All male competition is based around the ability to deal with the feminine, with the liquid that threatens to corrode or explode at any moment, to be able to contain and carry this alien, sensitive fluid.