The Ethics of Hysteria & of Psychoanalysis
VICENTE PALOMERA

Poem Reaching For Something

we walk through a calligraphy of hats slicing off foreheads
ace-deuce cocked, they slant, razor sharp, clean through imagination, our
spirits knee-deep in what we have forgotten entrancing our bodies now to
dance, like enraptured water lilies
the rhythm in liquid strides of certain looks
eyeballs rippling through breezes
riffing choirs of trees, where a trillion slivers of sunlight prance across
filigreeing leaves, a zillion voices of bamboo reeds, green with summer
saxophone bursts, wrap themselves, like transparent prisms of dew drops
around images, laced with pearls & rhinestones, dreams
& perhaps it is through this decoding of syllables that we learn speech
that sonorous river of broken mirrors carrying our dreams
assaulted by pellets of raindrops, prisons of words entrapping us
between parentheses — two bat wings curving cynical smiles

still, there is something here, that, perhaps, needs explaining
beyond the hopelessness of miles, the light at the end of a midnight tunnel —
where some say a speeding train is bulleting right at us ——
so where do the tumbling words spend themselves after they have spent
all meaning residing in the warehouse of language, after they have slipped
from our lips, like skiers on ice slopes, strung together words linking
themselves through smoke, where do the symbols they carry
stop everything, put down roots, cleanse themselves of everything
but clarity —— though here eye might be asking a little too much of any
poet's head, full as it were with double-entendres 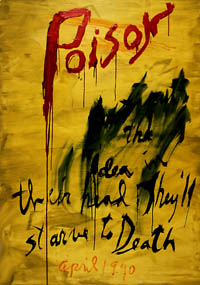 Untitled
in brussels, eye sat in the grand place cafe & heard
duke's place, played after salsa
between the old majestic architecture, jazz bouncing off
all that gilded gold history snoring complacently there
flowers all over the ground, up inside the sound
the old white band jammin the music
tight & heavy, like some food
pushin pedal to the metal
gettin all the way down
under the scaffolding surrounding
l'hotel de ville, chattanooga choochoo
choo choing all the way home, upside walls, under gold eagles
& a gold vaulting girl, naked on a rooftop holding a flag over
her head, like skip rope, surrounded by all manner
of saints & gold madmen, riding emblazoned stallions
snorting like crazed demons at their nostrils
the music swirling like a dancing bear
a beautiful girl, flowers in her hair

the air woven with lilting voices in this grand place of parepets
& crowns, jewels & golden torches streaming
like a horse's mane, antiquity riding through in a wheel carriage
here, through gargoyles & gothic towers rocketing swordfish lanced crosses
pointing up at a God threatening rain
& it is stunning at this moment when raised beer steins cheer
the music on, hot & heavy, still humming & cooking
basic african-american rhythms alive here
in this ancient grand place of europe
this confluence point of nations & cultures
jumping off place for beer & cuisines
fused with music, poetry & stone
here in this blinding, beautiful square
sunlit now as the golden eye of God shoots through
flowers all over the cobbled ground, up in the music
the air brightly cool as light after jeweled rain
still, there are these hats slicing foreheads off in the middle
of crowds that need explaining, the calligraphy of this penumbra
slanting ace-deuce, cocked, carrying the perforated legacy of bebop
these bold, peccadillo, pirouetting pellagras
razor-sharp clean, they cut into our rip-tiding dreams carrying
their whirlpooling imaginations, their rivers of schemes
assaulted by pellets of raindrops
these broken mirrors catching fragments
of sonorous words, entrapping us between parentheses
two bat wings curved, imprisoning the world 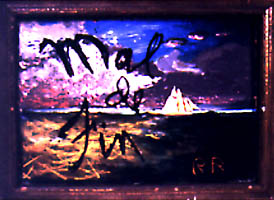 Snow & Ice
ice sheets sweep this slick mirrored dark place
space as keys that turn in tight, trigger
pain of situations
where we move ever so slowly

so gently into time — traced agony
the bright turning of imagination
so slowly
grooved through revolving doors, opening up to enter
mountains where spirits walk voices, ever so slowly
swept by cold, breathing fire