On Love as Comedy
ALENKA ZUPANCIC

From Identification
to the Logic of
the Perceived
RICHARD KLEIN

A Sophism of Courtly Love 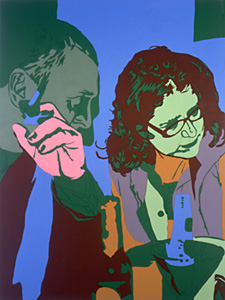 The "Homage to Marguerite Duras, on Le ravissement de Lol V. Stein," is a Lacanian text from 1965, first published in the Cahiers Renault-Barrault, a theatre publication of august memory in the December edition of that year. Difficult to find in that edition, it was republished in Ornicar? in 1985.1 I reread this text, inspired by Jacques-Alain Miller's commentary on "Le Temps logique et l'assertion de certitude anticipée", and the structure of sophism linking the apologue of the three prisoners. In Marguerite Duras's novel,2 there is also a question of prisoners, but prisoners of a particular form of love that Lacan inscribes in a series of texts on courtly love. The novel describes the stages of seclusion, then the given outcome of the confinement. I wanted to follow the stages of the seclusion, structured by Lacan, in relationship to the sophism of the three prisoners.

Lacan's commentary on the Marguerite Duras text was inspired by Michèle Montrelay, which he mentions in the text. But Lacan had known Duras and her circle for a long time.3 They hadn't seen each other for awhile, and this was an occasion for a reunion in a period when Lacan was having a dialog with French feminist movements.