The Ridiculous Excess
of Mercy

The Portrait of a
Russian Gay Gentleman

The Young Woman
and a River
SLAVOJ ZIZEK

C Major or E Flat
Minor? No, Thanks! 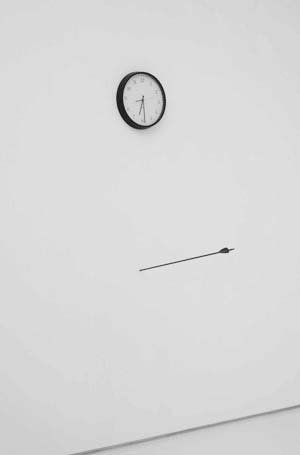 The clock struck 6:30, no mouse ran down, dickory, dickory, dock. æror-ticks: the arrow that pierced the wall harrows my heart.

At 6:30 am,
He no longer loves her, what he loves is the vision of himself displaying his love for her

Let it be a contemporary Orpheus coming alive in chapter 1 of Wagner and Consequences. Prompted at the brink of jouissance he wants to lose Eurydice as a flesh and blood person so to be able to discern her beautiful features everywhere, in the stars, in the sky, in the glistening of the morning dew Jouissance is of the One, even if the actual fantasm scenario includes them both. I will sacrifice myself, to provoke him into turning around and losing me, so that he will be able to become the great poet he deserves to be.

The æror-ticks is not in their bodies, but in their songin the words of their related songs. When it ticks it says, even if it wants to know nothing.

In the being that sings, the æror-ticks is strictly equivalent to its fold, so to say, to his division of subject... Or rather it identifies its being with its body, which is already somebody else, being now somebody else.

We mathematize it as Lacan would enjoy doing.

The point at which the arrow pierced the wall has no dimension. Another point in space will allow for a line. The points have no dimension but the line has one.

The line cuts a surface, the surface has two dimensions.
The surface cuts space, space has three dimensions.
Take the two original points, wring them, join them together. You are left with a One, and a ring.

Not the classical bivalent logic where there is an identity principle and an excluded third one. Terms convey a meaning not identical to themselvesa god being a bit of a man, a woman being a bit of a goddessthere isnt one sex and another, but only one, and the contrivance of the other sex. Mythical jouissance partakes of the mystical, there, where three fold into One.

Jupiter tells Pluto to give him Eurydice back, and he tells Pluto, and he tellstill, in the guise of a fly, he makes his way through the key-hole into the room where Eurydice is kept under guard. He suggests that they should escape together to Olympus. Cupid reminds him that Orpheus is on his way, with straight-laced Public Opinion. Cupid suggests he must allow Orpheus to take Eurydice back with him, provided he does not look around as she follows him. In the drama, conpicuously drawn by Albert Herter on page 20 of Lacanian Ink 41/42, Orpheus does not look around until Jupiter hurls a thunderbolt and shocks him into it. This is how he happily loses Eurydice, who becomes a priestess of Bacchus, god of wine.

Between the enraptured Jupiter and Eurydice as fashioned by Mozart, mutual passion is nevertheless embracing an Other. Let us say of the vision of this Other, provided it entails a threefold jouissance, that it enclothes the contorted bodies, it flickers in the pleats, it conveys an other song.

Calling to mind the Trinity, the Ghost will be the phallus. Myths like mystics take in the Holy phallus while subtracting it from the relation FatherSon; let it bring forth the Other jouissance (of the Woman), as well as the jouissance of the Other (God). And why not interpret one face of this Other, its æror-ticks-face, as based on feminine jouissance.