Lying in the garbage heap,[1] we find the I schema, Lacan’s attempt to symbolize Schreber’s way at the end of the psychotic process, but if this is the end, why this inward swerving, swerving with gaps, whose swerving immediately brings to mind Lucretius’ clinamen, the universally constitutive and unpredictable swerve of atoms from an a priori straight path through the void? 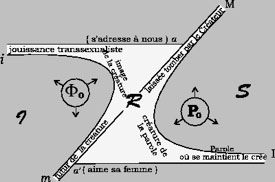 While the special theory already introduces the notion of curved space, it conceives of the curvature as the effect of matter that curves space, i.e. only empty space would not be curved. With the passage to the general theory, the causality is reversed: far from causing the curvature of space, matter is its effect and the presence of matter signals that space is curved.[2]

If we follow Einstein, Lucretius got it wrong. The original fact, the minimal element, is the curvature of space in the void, into which some matter must appear to signal that it is curved. There is clinamen, a swerve in matter that precedes and precludes matter in-itself. As Mladen Dolar puts it:

So clinamen has always already happened… It is not a secondary fate that would befall the atom in itself in its supposed straight path – once one has departed from the path, one supposes the straight direction, but a direction that doesn’t exist in itself. Straying retroactively produces the in-itself, and this is where the subject comes in.[3]

For Lacan, there can be nothing before the signifier, but in the mythical moment prior to symbolization, nothing has a choice to make, though a forced one, Bejahung or Verwerfung, one way or the other.

If it is Bejahung, than the primordial signifier is symbolized, along with it, the lack in being its symbolization attributes. Freud laid it out in his paper on “Negation” (1925), the ground for negation (Verneinung), the judgment of existence, “to be or not to be,” is paved by the judgment of attribution it attempts to annul. If the subject wants to know nothing about it, he will fail. He already knows it. “It’s not my mother.”  Maybe “yes,” maybe “no,” but he’d prefer not. We are not so concerned with this “yes-no” sayer in all of its proliferations.

If it is Verwerfung, the primordial signifier is refused symbolization, along with it, the non-being that brings into existence the ground for being to raise itself up on. Jacques-Alain Miller calls this choice “unthinkable’” before offering us the means to grasp it, “— since that would include, in some way, the fact that separation anticipates alienation.”[5] If he knows nothing about it, he will fail “spectacularly.”[6] He knows nothing “and yet it moves.” For the psychotic subject “no” means, and when it returns, it will return with enormous meaning. “No” may not only mean “yes”… it could mean a “kick to the head!”[7]

… what is refused in the symbolic order re-emerges in the real.[8]

To return to Žižek’s discussion of Einstein’s passage from special to general theory:

In psychosis, the swerving path of the symbolic, and the gaps and inconsistencies it introduces, the distance between the symbolic and the real, is rejected, a lack of distance which opens up the possibility, though not necessarily the necessity, of the swerve of the symbolic swerving in on the psychotic subject, opening a further hole in the imaginary where the subject would be propped up by the phallic image, re-emerging in reality, and injecting him with gaps and inconsistencies that are not out there, but return whole as the real that rushes to close the gaps. A real father, a One father [Un-père], must appear in one of these gaps to signal an absence, but the defense of the rushing real is not directed against the real father who appears there, it is against the there where he appears.

In psychoanalysis defense is directed against a mirage, a void, nothingness, and not against anything that exists and carries weight in life.[10]

The psychotic recreation, symbolized by the I schema, is what has come to swerve the subject away from the holes in the symbolic and the imaginary, and through the gaps and inconsistencies immanent to reality that the swerving has opened, a clinamen of clinamen.

The schema shows that the final state of psychosis does not represent the frozen chaos   encountered in the aftermath of an earthquake, but rather the bringing to light lines of efficiency that makes people talk when it is a problem with an elegant solution.[11]

So then, Lacan’s schema formalizes the already after the fact of the foreclosure [Verwerfung] of the-Name-of-the-Father, the structural non-foundation of the psychotic subject, that has left Schreber open to a hole in the symbolic, and its contingent return in reality as the real, whole with the delusional reconstruction that is the solution.

Or did Freud already say it?

The delusional formation, which we take to be the pathological product, is in reality an attempt at recovery, a process of reconstruction.[12]

Yes, but here there is one step further, as Lacan returns to Freud:

For it is a fact that without any other support or prop other than a written document- which is not only a testimony to, but also a product of this final state of psychosis- Freud shed light on the very evolution of the psychotic process, allowing us to elucidate its proper determination, by which I mean the only organicity that is essentially involved in this process: the organicity that motivates the structure of the signification. [13]

The only organicity is the body of the signifier, whose essential organicity is the essential problem for Schreber, as he lacks the only one, the Name-of-the-Father that would be a full stop to the endless sliding of signification. In order for there to be a full stop, and there is an order, a logical one, Schreber would have had to answer the call of the signifier that summoned him. As Wagner says through Parsifal, “die Wunde schliesst de Speer nur, der sie schlug,” the wound can only be healed by the spear which made it, and Schreber refused the spear that would cut his hole a wound.

And so they come … Nervananhang, Seelenmord, etc… not appearing from nowhere, but taken from the synchronic whole, cut up, fragmentized, and re-arranged as neo-logical constructions, as signifiers in themselves, charged with meaning, and referring to meaning only known and unknown to the subject Schreber to whom these words have appeared in simultaneity as revelations and ruptures coming in the place of something that never was and has no name.

Schreber’s attempt at a solution here at the end of the psychotic process is the authorization of a body words, the Memoirs of My Nervous Illness, in which these word bodies can hang together, acting as a substitution for the substitution that never came to be. As Eric Laurent puts it:

The delusional work can be conceived thus: to construct the letter with the aid of the letter to the point where it can abolish the symbol and really raise it to the second power. This is what will makes its co-existence compatible with the absence of support, not of an established discourse, but of any established Name-of-the-Father. [14]

The success of this work is already the body Schreber is left with, however, it is never wholly so, [15] as Schreber will continue to add postscripts and appendixes to this already massive production, and moreover, will continue to be troubled by the formation of the organ, not the female organ, but the organ of the transsexualist jouissance that he sees forming and localizing in his dressing room mirror, and whose appearance in the I schema points the way to Lacan’s next teaching and the subject of jouissance.

The question then becomes “how to live with organs?”

In Schreber’s own words, which we return to after neglecting Lacan’s warning not to forget them:

Where intellectual understanding ends, the domain of belief begins, man must reconcile himself to the fact that things exist which are true although he cannot understand them.[16]