My Dinner with Jacques
DAVID HAYMAN

Next to Nothing
LYNNE TILLMAN 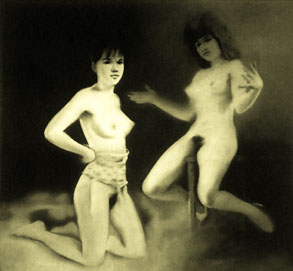 What exactly is this 'crack' Celtic people talking about ? In Ireland or Scotland the phrase 'Looking for the Crack' though admittedly slightly old fashioned is still widely used despite, or perhaps because, it is unknown outside those communities.

This 'crack' that everybody hunts for on a Friday or Saturday night might be loosely defined as a good time, a celebration, a satisfying social encounter, fun in fact.

In Glasgow it might more likely imply good conversation, entertaining repartee, amusing anecdotes or badinage, in Dublin it might take the more physical form of drinking and dancing, but the real definition of 'the crack' is that it has no precise definition. To paraphrase the old jazz adage, if you don't know what it is then there's no point being told, for 'the crack' covers such a variety of pleasures, such a range of unfixed meanings, that those who ask what it exactly is have exactly missed the point.

Looking for the 'crack' in an etymological sense, looking for the meaning of the word, one would be tempted to suggest that it is the Celtic equivalent to that modish French term jouissance, as both cover untranslatable, indescribable delights.

Certainly no Irishman would ever explain to a foreigner the meaning of 'the crack' any more than a Lacanian would deign to explain jouissance to a stranger.

At first one would assume this 'crack' has a risqué, blatantly gynecological meaning, referring to that physical fissure of femininity, that amazingly precise slice which due to the nature of anatomy is seen at its most overt in the work of Hans Bellmer or by those with an infant daughter, rather than by women themselves. But talk of 'the crack' is not uniquely male, and though doubtless many women have indeed been 'looking for the crack' on the advice of Cosmopolitan magazine with a mirror, this exclusively vaginal quest would seem improbable. However, it would be delicious if this were indeed the root of the expression, cutting through the entire etiquette of courtship and stating with radical simplicity the central male search, "Oh I'll be going out tonight, looking for the vagina."

But talk of 'the crack' is not uniquely male, and though doubtless many women have indeed been 'looking for the crack' on the advice of Cosmopolitan magazine with a mirror, this exclusively vaginal quest would seem improbable. However, it would be delicious if this were indeed the root of the expression, cutting through the entire etiquette of courtship and stating with radical simplicity the central male search, "Oh I'll be going out tonight, looking for the vagina."

Note that it is never 'a crack' but always 'the crack', rather than a specific vagina belonging to someone, a universal, generalized, Ur-vagina, 'The Origin of the World' as painted by Courbet. This primeval notion of desire is pleasing in its directness, editing out everything but core need, implying that the vast apparatus of fetish, stimulation and romance, everything from lingerie to roses, unrequited love to the charms of feminine ankles or breasts, are nothing but ornate rituals that have grown up around and obscured that irreducible, central urge for 'the crack.'

Henry Miller describes this singular, pointless obsession in Tropic of Cancer; "There's just a crack there between the legs and you get all steamed up about it - you don't even look at it half the time. You know it's there and all you think about is getting your ramrod inside; it's as though your penis did the thinking for you. It's an illusion! You get all burned up about nothing...about a crack with hair on it, or without hair. It's so absolutely meaningless that it fascinated me to look at it. All that mystery about sex and then you discover that it's nothing — just a blank."

Indeed male homosexual desire does seem to operate in this utterly fixed mode of monomania, 'looking for the cock' being the sole purpose of all flirtation. Yet masculine heterosexuality seems to have been diverted, diluted, into a wide variety of weird needs, whether intelligent conversation or bondage, and has become almost as complex and sophisticated as female sexuality. "What do men really want?"

If 'the crack' that men are looking for is merely vaginal penetration (a qualified 'merely' of course) then how is it ever going to be sufficient to the burden of obsessive exigency that leads to it, how can any vagina live up to this role as lifelong grail of masculinity? In this sense 'the crack' mimics the term jouissance, which may literally mean 'orgasm' but which not even the greatest orgasm could actually embody, for jouissance is the orgasm beyond orgasm, it is the goal every orgasm strives towards but can never quite achieve.

Surely every man has on occasion wondered at the moment of climax whether that was really it, whether that was the entire goal and purpose of his sexual being, if this relatively brief moment of pleasure is sufficient reward for the longer labors of seduction and courtship? Not having experienced the altogether more diverse and multifold pleasures of female orgasm one would not be in a position to say if that is enough in itself to be enough, but certainly the single stab of pleasure afforded the male in orgasm sometimes seems like a genetically programmed cheat.

To quote Freud, perhaps there is "...something unsatisfiable in the nature of desire itself..." and that unsatisfiable something is the 'crack' or jouissance that one continues looking for although one already knows that it is by its nature impossible to grasp.

But the most common use of the term 'crack' today has nothing to do with the ambiguous Irish term referring instead to the potent street drug 'crack cocaine.'

However, this drug provides an even more direct parallel to the mysteries of jouissance than any Celtic slang. In fact 'crack' cocaine might have been invented by a Lacanian drug dealer to demonstrate the rich stupidities of the human drive.

Exactly like the male orgasm 'crack' is an addictive desire, an uncontrollable compulsion that continually offers less than the 24 hour search for it could ever imply.

Just as it is baffling, and to men themselves, that they could have spent so much time and energy and imagination on the quest for sexual satisfaction, the end result of which is apparently 40 seconds of bliss, likewise the crack addict is constantly thwarted by the experience of the drug itself, which he has just devoted an entire day of hassle and hustle to finally scoring. The genius of crack is that it gives so little back relative to the strength of its addiction and that as soon as you partake of it, the very instant you've finished, then you immediately need it again, an ideal metaphor for all desire. Unlike, say, heroin or marijuana the effects of crack are instantaneous and very brief, the 'high' is massively strong whilst it lasts, but that is usually no more than a couple of minutes and more like thirty seconds, the ultimate male orgasm drug.

Reeling with pleasure the crack user hardly has time to adjust before his entire body and mind is craving for it again, again and again as if satisfaction were constantly just out of reach, as if the constant search secretly constituted the actual desire.

Where is the moment of completion, of satiated need for the crack addict? In the minute of chemical explosion that follows smoking the drug or in the very need itself? To quote Will Self's story The Rock of Crack as big as the Ritz; "The whole hit of rock is to want more rock. The buzz of rock is itself the wanting of more rock...the realization that crack was the desire for crack."

The crack smoker can never achieve jouissance because he has given himself over entirely to the search for something whose nature is to elude completion, the only termination of such a desire being in death, a consummation worthy of Bataille.

Watching crack smokers hanging around all day begging, cajoling, willing to do anything to satisfy their addiction and then seeing them finally score, smoke, and stagger back, it is easy to be frankly baffled by this pattern of grotesque need for minimal attainment, but all we are really witnessing is the ritual of jouissance being played out at its most raw.

Jacqueline Rose's description in her introduction to Feminine Sexuality could be perfectly applicable to crack. "The drive touches on an area of excess, it is 'too much.' Lacan calls this jouissance, literally 'orgasm' but used to refer to something more than pleasure which can easily tip into its opposite."

When you watch someone in the throws of a crack high, like someone at the height of an orgasm, it looks as if they are suffering as much as enjoying themselves, it is hard to tell if they are in pain or ecstasy, lost in that impossible instant of achievement, that instant whose very definition is one cannot live there more than very briefly.

To smoke crack may seem a very odd and pointless thing to do, as purposeless and illogical as any other grand pleasure (equally impossible a task as sexual desire), but in its repetitive, compulsive lack of completion it seems as good a definition as any of jouissance.