Plants hang in space. Space is grey, beige, blue, even black. And space may have different tonalities and texture: be it in the way of a spout, a drip or even lavish accumulated matter, sudden roughness will hastily stick out a partial statement.

Plants vary in perspective and size: they veer in sense according to presupposed purpose. It is a family apartment, an airport, a mattress, or a couple of plants which joined together produce in turn another plant.

Or they veer in non-sense according to unexpected elements: tears, hanging men, a microphone. Erotically invested, inanimate objects are screened through altering context. Drama reveals in human traces — beds, chairs, lamps, kitchen and bathroom furniture, interaction happens to reproduce endless circumstances. What is missing is not necessarily absent. People are there... they are everywhere.

Although the plant will become so abstract as to even unfold into a crown of thorns — in itself a structure — it is this phantasmal idea of a plant that sustains mythical intention. Interpellation from the phantasmal place frames a solemn square of blue: empty space...?

Mattresses on walls tackle the field of sculpture. On their quilted surface — roads, high roads and highways run afoul of one point of the capiton to another. Cities intersect at these points while coding certain meaning: a halt in an assigned way? Contingency, eventuality?

Maps privilege Poland, Germany and Holland. This sets up a question on routes seemingly marked by histrionic destinies.

Abstracts of a conversation with the Artist 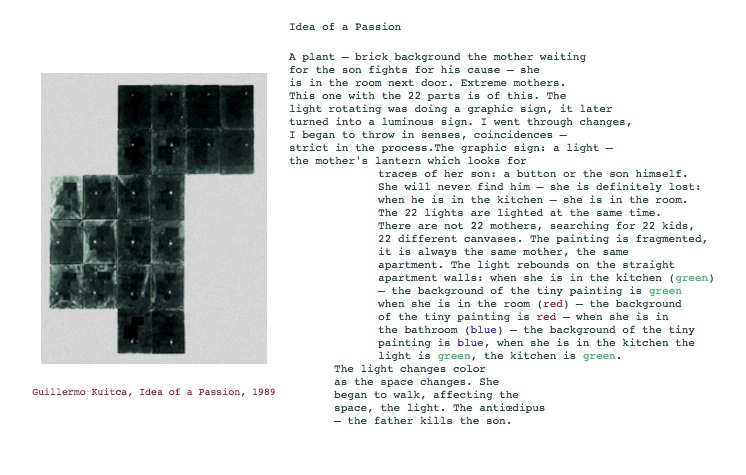