The Desire of Lacan
JACQUES-ALAIN MILLER

Femininity between Goodness and Act 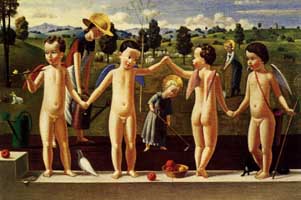 Let us approach the central topic of Lacan's seminar Encore - the paradoxes of feminine sexuality - through Lars von Trier's Breaking the Waves (BW), a film which enables us to avoid the fatal misreading of Lacan's notion of feminine jouissance.

BW, a film about the inherent deadlocks of Goodness,1 is set during the 70's in a small Presbyterian community on the West Coast of Scotland. Bess, a simpleminded and deeply religious local girl, marries Jan, a hearty oil-rig worker, courting the disapproval of the village elders. After the sexual ecstasy of their honeymoon Bess can't bear having Jan return to the rigs, so she begs God to return Jan to her saying that in exchange for his return she would put up with any trial of her faith. Soon afterwards, as if in answer to her prayers, Jan effectively returns, but paralyzed from the waist down due to an accident on the oil-rig. Confined to his hospital bed, Jan tells Bess she must make love to other men and describe her experiences to him in detail-this way, she will keep awake his will to live: although she will be doing the act physically with other men, the true sex will occur in their conversation...

Here, of course, the obvious reproach imposes itself: is thus BW not the utmost "male chauvinist" film celebrating and elevating into a sublime act of sacrifice the role which is forcefully imposed on women in patriarchal societies, that of serving as the support of male masturbatory fantasies? Bess is completely alienated in the male phallic economy, sacrificing her jouissance for the sake of her crippled partner's mental masturbation. However, at a closer look, things get more complex. According to the standard version of the Lacanian theory, the non-all (pas-tout) of woman means that not all of a woman is caught up in the phallic jouissance: She is always split between a part of her which accepts the role of a seductive masquerade aimed at fascinating the man, attracting the male gaze, and another part of her which resists being drawn into the dialectic of (male) desire, a mysterious jouissance beyond Phallus about which nothing can be said...