What made for an event at the dawning of the century, and for the entire century, is, on one side, a quite ordinary object, a bicycle wheel mounted on a stool, and on the other, a black square on a white canvas, twice nothing. Duchamp and Malevich. Bicycle Wheel and Quadrangle, a.k.a. Black Square on White Field. Duchamp's first ready-made (retrospectively), from 1913,1 and Malevich's first square, from 19152 (the first "Suprematist" object). I consider these works of art as emblematic of the century. 1 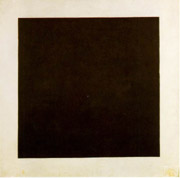 Whether we like it or not, for good or for bad, directly or indirectly, abstraction and the ready-made (rdm) lead the way. All else follows. If you need to give meaning to the notion of contemporary art, it should be as Duchamp and Malevich's contemporary art. "What that modern is?" asked E. Martineau3. "Black Square on White Field exhibited by Malevich in December 1915 is modern" - and, of course, Duchamp's Bicycle Wheel in 1913. Boisterous simplification, the History of Art will undoubtedly find something to say, and yet, it will admit that these works of art matter, and the debate stays open - they exude a highly tickling power. Two great disturbances in art. They represent the major work of our modernity.

and there, several late "copies," "doubles" or "clones" by Duchamp himself.

Duchamp first used the appellative ready-made in 1915, when in New York he

ready-made - which he titled In Advance on the Broken Arm. The designation of

2. Quadrangle, at the Tretiakov Gallery in Moscow, is the original title of this

painting known as Black Square on White Field. In fact, this was not the

original name given by the artist, but a description, his own, of the object.

It lasted since then.