Of an Obscure
Disaster
ALAIN BADIOU

Psychoanalysis
and its Golem MARIO GOLDENBERG

Slow Time
and the Limits
of Modernity
DAVID EBONY

Josefina Ayerza: My first impression as I walked into the room and glanced at the new work on the walls was that you had brought in elements which enact the particular event of painting — the stroke so free drawing down the hand that holds the brush the pot of paint that could be seated on the ground As for the change in your work, can we say of what exists on the actual surface is movement?

Jacqueline Humphries: Yes, the form is the gesture, and has that element of time within it. You see it as immediately as it was made, though there are things there which slow it down as well. The line (drawing) is a kind of register of action or movement, but it also functions pictorially.

JA: As we looked through the work you pointed to the line at the top and at the base of your paintings, "it articulates a space, shapes it, defines it." The space, white, rather empty, appeared quiet… what makes for the specific difference between the line as a register of movement, and the line as it functions pictorially?

JH: Well, with the borders I wanted to reinforce the feeling of "picture." So those borders function differently from the painted image proper, in that they set up a kind of reading of the space, liken it to the photographic (and maybe borrow some of its transparency). The image within those borders is very painterly, and brings attention to material and making.

You can see how the line, which is the gesture, furthers itself by kind of melting into the ground and becoming one with it, and that has everything to do with the specifics of the paint and the act of painting. What I wanted was for these two rather contradictory realities to be held in suspension, to coexist in apparent negation of each other but without canceling each other out.

JA: You tell me of the white space making for the tension between realities to be held in suspension, to coexist in apparent negation of each other without canceling each other out. The function of silence in language comes to mind. Thereof could we say you are using the structure of language even if you don't use words?

JH: I start with basic elements, which are primary yet undefined. When the elements come together you have a more complex structure, which may be like language, but I always want to break it down to where the baseline assumptions of painting and the pictorial are brought into play. But I have operated on the premise that there was a highly syntactical dimension to painting; where things are and how they are determines what they are or how they're seen. There is a narrative of looking which exists independently of subject matter, as well as all kinds of slippage as to meaning or message. With painting or the visual there's more ambiguity than you might ordinarily want from written or spoken language. I mean, in my painting there really is no simple subject matter and no message; they are essentially performative. The act of making and the traces of gesture and material are major players in what you see. There is interplay between what are highly structured elements, and then more ephemeral ones, which have a sort of mercurial effect on the whole.

Every painting has its own laws; the riddle of those laws being solved on a picture-by-picture basis. There is no rigidly generic structuring. Many parallels to language exist, but it's an unstable analogy because really painting is more like world. It's highly phenomenological, resistant to ordering, also to language itself. Sort of has a mind of its own. Probably we use a different part of the brain to make it, and a different part of the brain to look at it than for language. Perhaps it is a provocation of language.

JA: If we understand painting as having a mind, that is a mind of its own, even if there are no words there should be a thought. How does this thought intervene in the action? Again, does the different part of the brain involved belong in the work-of-art?

JH: I think that painting is a medium of thought. As a material it doesn't just bend to your will, you have to interact with it, grapple with it. Painting is thinking in material, the pleasure involved in externalizing something that's internal. But one also has to deal with the history — everything that's ever been done in painting; and then there's everything that we bring to it as viewers, all our own expectations, our personal history etc. And there's memory — you're never just dealing with the painting in front of you, but with all other paintings whether you're conscious of them or not. There is an a priori situation, which is integral to its quality as medium. So, painting is a kind of consciousness that we interact with. The mechanics of how that works sort of defy description. It's an immersion, you're inside of it and it's inside of you. It's the world reflected in a mud puddle. 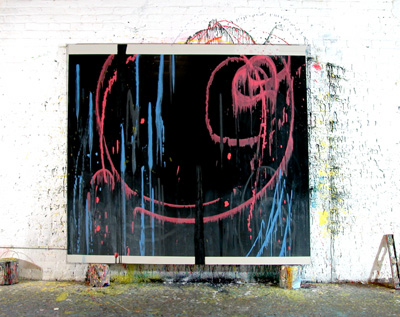 JA: In terms of structures, the a priori situation you mention — with its quality as medium, or the consciousness you interact with — discloses a place, an other, outside yourself. What should result from the interaction — the hand, the brush, the paint, the stroke — is that you appear in this other place, right? Again, with regard to the viewer, how does his interaction come into play?

JH: Yes, that's right, but in this situation "I" am "anyone." The "subject" is you, it's I, at the shared moment of standing in front of this painting. This space, this other place, isn't exclusive; it's anyone's, the artist's, the viewer's, private, public. It seems to me that what you're pointing to is the notion of projection, that one can project oneself mentally into this other thing, painting/space. So yes, I think that is very central to painting, and I've created work to make that proposition rather literally. Using the image of the screen, for instance — an image area, roughly the proportions of a movie screen, set into the larger space of the canvas:

I wanted to mimic the formal situation of movie viewing, but have painting displace the projected image. (I played with other types of screens or signage as well.) This was the origin of the borders. The screen is the presiding model of perception, yet our usual encounters with it, which are always encounters with the photographic, are so impoverished. They seem to say, "You are safe from this"; you're shut off at so many levels, locked out. I wanted to do something different with it than photography though, to use painting as this kind of agent, which restores aspects of the image lost to the photographic, a physical dimension for instance. Anyway, I was playing with that and that was the idea behind those experiments. The important thing is that it's not an actual screen with actual projection, but a sign of a screen. A space for psychological projection for the viewer; like "this is the site, the new landscape". A site of image production after cinema, billboards, TV commercials, Photoshop, the Internet. Photography relies on a mechanical apparatus to found its claim of objectivity (or truth), but painting must make that claim from within a deeply subjective experience. It has to do with something about the labor of making by touch and the labor of seeing, the deeply empathic connection there. Spooky. Painting is physical, visceral, material, body. It stands out against a background of mechanically produced images, because it's so in your space. 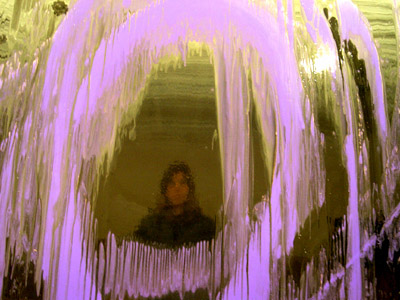 JA: In terms of "the real," purple as a reply to my formal question is striking. In one of his examples regarding the "real," Jacques Lacan tells how he is dreaming of someone knocking at his door, when the noise of someone knocking on his door wakes him up…

JH: Yes, that's Lacan on the other side of this interface, this plane which is like a looking glass. Don't we all know that feeling — like passing through a membrane — where you project momentarily that the dream has brought this person knocking at the door?