The Experience
of the Real in Psychoanalysis
JACQUES-ALAIN MILLER

Highly Speculative
Reasoning on the
Concept of Democracy
ALAIN BADIOU

The Giver Giveth,
and the Giver
Taketh Away
CAROLINE WEBER

Welcome to the
Desert of the
Real
SLAVOJ ZIZEK

This is an interview with Josefina Ayerza about Sue de Beer and Laura Parnes' exhibition at Deitch Projects. It's called Heidi II and it's based on Mike Kelley and Paul McCarthy's Heidi. It's the unauthorized sequel. 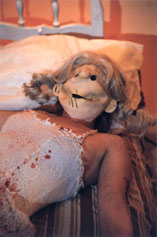 C: So Josefina, what happened first in the film?

J: Well, what happened first was this birth. It was a big thing that happened. In the way it was presented. This enormous vagina… very impressive. And also in the sense that this vagina was so active in itself… so as to push this thing out of itself. And you could see this activity there under your eyes. I liked the way they set up the expectation… the time for something to appear… till the head pops out. Of course I could see the rejection in the faces of other people, trying to run away.

C: Because when the baby comes out, it's not a pretty baby.

J: I was amazed to see this. I never saw my babies by the way, because at this very instance there is no mirror in front of you when you have a baby. You're just pushing. You don't see it in a mirror, that's the only way to really see that moment. You can only see it in somebody else. In the movie, it's a horrible thing that comes out, I would say.

C: So you think this vagina is Heidi's and she is having a baby Heidi?

J: I was thinking is this a real thing? Is it a real vagina, and is it a real photograph of a birth? Since I never saw a birth… I think it is not true that it is so tremendous…

C: Wasn't the vagina moving or talking? I don't remember. There were some words.

J: The vagina I don't think was talking. There was a voice-over with words spoken. But it was active, very active. Also I was impressed by the color, it was white what came out of there.

J: The baby is inside of placenta. And you could see this.

C: So what is the next scene after that.

J: I was very much watching these diseases.  I went back to look at the sofas and the diseases.

J: I was thinking why are we sitting on the disease. And I had to resolve it very quick, and think well we are sick because we speak. I'm not sure if it was exactly the next scene but I remember when she's in the cradle and she looks down and sees the doll. And she transforms from herself into the doll.

J: Well there is something before that I would say. When the child is born, she is the mother. In the beginning she is the mother inside. She really is. Then she is born. First there is something with the breast. And the desire starts when you are tiny, when the lips move, when you are hungry and there's the breast that the child stays with when they are not hungry at all. This would be the breast of the desire. But I think the first moment when they feel different from the mother is when the breast falls, when they don't get breast fed anymore, something is taken away. And now they desire it… You know desire is a lack of something.

C: In the movie they don't show any of that, the nurturing mother, who feeds the baby.

J: I don't remember any nurturing mother. What happens in the mirror stage is that she sees her image and she believes this is she, although the image is different, it's never the same. And she puts this image, like you put a dress, on top of her. She invests, or revests, herself with this image. And she says this is me. But maybe we could take that to the doll. In the film she invests herself with that image of the doll, she becomes the doll - an image outside herself.

C: What does she do that makes it seem that she invests herself in the doll?

J: Well you see her turn into a doll. Her face turns into the doll. And also a mask is very much something you put on. You dress your head as a mask and a baby dresses himself with his own image. She dresses herself into a doll, this is what she is in the film, right? I wonder why she called her Heidi. Maybe because Paul McCarthy did, but Heidi is una campesina, you know, like a girl of the wood, the mountains. But her doll could be Heidi. That's why I think she could have called this Heidi. Maybe her doll was Heidi, like Shirley Temple or Barbie.

C: In Kelley and McCarthy's Heidi, the men played important roles, the grandfather and Peter. In this one, Heidi the mother and Heidi the daughter play bigger roles. 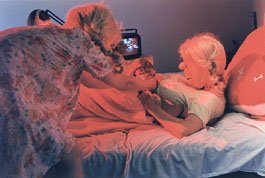 J: The mother tells her to stab the stomach with this pen.

C: Why does the mother have her do that?

J:  She's stabbing her stomach and there's some juice coming out, which could be ink, black ink. She writes and writes and writes, and she makes a total mess. At some point she's finished. And the mother comes and peels that off.

J:  No I think more than peels it off, she takes a piece of the stomach, like opening the door, and takes viscera out. And I was thinking it could be the heart, like a Pinocchio. And what she says is "You have a sex or you have soul."  So she pulls this out, and puts the television in place of that.

C: Is the television the soul?

J:  I had another fantasy. She's pulling out the soul, the heart, which is more connected to the soul, and saying have a sex. But don't have a soul. It's like an advice; if you have a soul and a sex you're doomed.  I have no idea, but that's my interpretation. She puts in a television, which is a cold technical thing, where everything tells a story, but it's a cold apparatus there.

C:  Television seems to play a large role in the film. The grandfather is always watching the television. Peter and the grandfather watch the television. And then she gets a television in her. That's kind of strange. She gets that thing that they have been staring out through the movie inside of her. You see, I think this is trying to invert all the things…

C: So suddenly she has the desire of Peter and the grandfather inside of her, almost like a phallus.

J: She becomes it, you say?

C: She becomes what they are going to look at.

J: At the same time, you know Pinocchio? He didn't have a heart. And then came the fairy to put the heart in. But this one…

C: …gets the heart taken out.

J:  Well maybe the girl can look at the television, at whatever's happening to her in there. She can look at the story. If she can look in her story, there probably is a distance to not have a soul. I think that's a very good way to put the message of the mother. You have a sex or you have a soul but if you have both you are going to suffer too much. 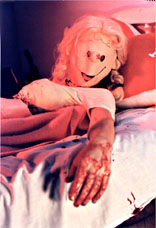 THE AMERICAN A BJECT

J: To me it's a Derrida word. It's very subjective, but if America brings something, it's the esthetic of the jeans, let's say. Everybody has jeans. They uniformed the world. And I think they are something everybody wants to have. Jeans are as revolutionary as the Beatles, although the Beatles aren't abject. If you think of fashion, Dior, Chanel, this small group of people directing fashion, I can't think of something more abject. I think this is how the word works. I think now there is another term going a little further. I think America has a lot to do with the new esthetic. Like Coca-Cola for instance. America covers enormous surfaces with these things. And these things are abject in the beginning. From the diseased chairs they have you sit on. The birth, the throwing up, the stomach of the girl. There is some disgust you go through. I like that sensation. It goes together with opening up, it makes your scope bigger.

C: Of your thought?

J: Of your possibilities? Let's say you love someone, get close to the abject of that person. Just get close and love it. The abject was hidden, covered. The American esthetic, it is a new esthetic, it puts it there for you to love it.