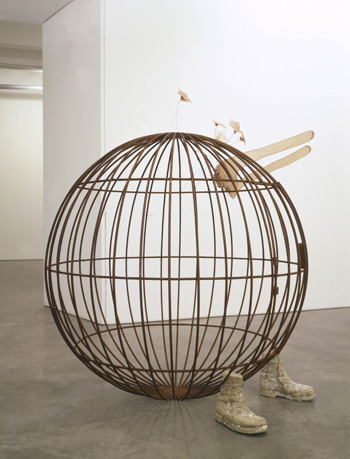 
on Nietzsche's pivotal statement, "God is Dead," British artist Sarah Lucas titled a recent New York exhibition of her sculptures, "God is Dad." 1 As the title of the show implies, many of the works on view conjure a dominant male figure; also appearing in each sculpture are signs of a submissive female.

Germane to this exhibition, a recent book by Slovenian theorist Alenka Zupancic, The Shortest Shadow: Nietzsche's Philosophy of the Two, 2 focuses on Nietzsche's concept of the two as well as on the mid-day moment that heralds the zenith of humankind, as espoused in Twilight of the Idols, Thus Spake Zarathustra and other writings. Zupancic also discusses at length Nietzsche's proclamation of the death of God, and the philosopher's notion of God as the "(generic and generative) power of the Symbolic... God as the synonym of the symbolic order or linguistic structure." 3

Both Lucas and Zupancic are linked in these recent efforts not only by addressing in one way or the other the Nietzschean "event" and widely divergent notions of "the two," but also by using a similarly psychoanalytical approach to their projects. 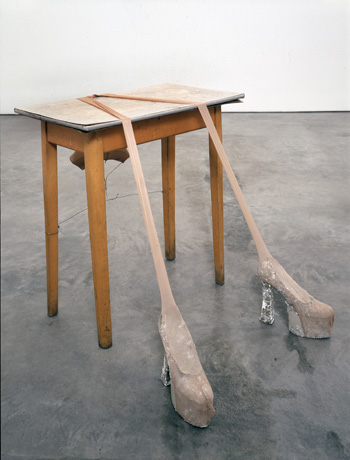 Imaginatively, Zupancic's statements suggest a temporal element to the figure of the two as it appears in sculptural form in Lucas's work, particularly in those pieces that convey a domestic interaction that has just transpired or is about to take place between the unseen couple. A number of such pieces convey a battle of the sexes whose outcome is clear: male aggression gains the upper hand over female vulnerability. In Spread Yourself Little Table, the pantyhose is stretched, legs apart, over an ordinary wooden kitchen table. The feet of the hose cover a pair of concrete platform shoes on the floor and the stockings are pulled tight across the table to connect with a wire hanger attached to another wire that spans the lower legs of the table. The obscene spread of the stocking legs and the way the hose is stretched to the tearing point over the table could suggest an act of violation, a kind of a ghost of a sexual encounter that has just occurred or one that is about to happen. While the hapless woman still lies against the table, the man has either departed the scene or is about to enter it.

The imagery of Lucas's recent works is ultimately propelled by the death drive, "calling up Thanatos rather than Eros."4 There is a certain morbid element to works such as the exhibition's title piece, in which a sheer nylon body stocking hanging on a bent wire hanger dangling from the ceiling would recall a flayed corpse were it not for the light bulb glowing from the crotch. A scene of posthumous transcendence is hinted at in the remarkable Aunty Jam. Here a pair of dirty work boots rests on the floor near the door of a large rusted metal spherical cage, like a giant bird cage. At the top of the globe, a pair of stretched nylons attached upside down to the top of the sphere suggests a figure. Perhaps a woman, the occupant of the cage, has recently expired and ascends to some heavenly realm-feet first. Reinforcing the idea is a cluster of stars made of nylon stretched over wires and attached to the bars near the pantyhose.