A witness to the stage setting culture of the 90s and into the cockcrow mindfulness of the 21st century, lacanian ink's span accomplishes 15 years of bestowed insistence. Actually, if its purport is Jacques Lacan's psychoanalysis, our 24/25 Spring issue, on Eroticism, comes to double the bet. A special issue, the translation efforts of our dear collaborator Barbara Fulks I indeed want to acknowledge. 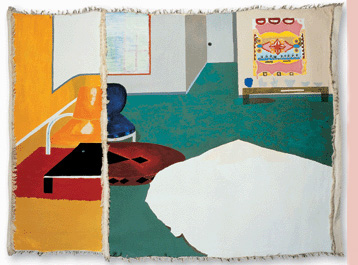 In her "A Sublimation at Risk of Psychoanalysis," Marie-Hélène Brousse narrates a clinical case. The subject is an artist that lives by his art, is a famous figure recognized in that milieu... "What is the nature," she asks, "of this convergence noted by Lacan between artistic practice and analytic practice, or again, later in his teaching, between "sinthome" and art?" Let one be the reverse of the other, symptom and art will together endure over the same structure.

Alain Badiou's, "Third Draft of a Manifesto of Affirmationism," holds political emphasis and intriguing new ideas such as me-ism. Actually he sees our time as drenched in the uniqueness of a doctrine, engulfed by constraining unanimity which, under the name of democracy, builds up around it. "Any unique doctrine is desperate, nihilist, because it only proposes to the human multiplicity the absurd perpetuation of its obscene order. And the artistic subjectivity that it leads to is that of this nihilism and of this obscenity." A perverse endeavor, the sublime desperation of the body is formalized and thereof delivered to the jouissance of the Unique.

At what edge is Stuart Schneiderman? Severely questioning psychoanalysis' adroitness on behalf of "The Boy Who Cried Wolf," he will infer that "... with the Wolf-Man, Freud was trying to neuroticize a depression. This strategy involved turning something he did not know how to treat into something he believed he could cure..." And he tells us how Lacan also had his say in concern with Freud setting a fixed date for termination, which may have provoked the patient's later decompensations.

To follow the argument let's regain Badiou for whom the massive dispositions of thought are only detectable through Marxism, psychoanalysis and German hermeneutics. There is however a fourth term to the equation, I would say, and this is Pragmatism - Peirce, James, Dewey, Rorty... Or Vladimir Nabokov who had complete disdain for Marxism but seemed to consider it to be so intellectually trivial that he wasted little ink in attacking or parodying it. His real bugbear was Freud; the Forewords to every one of his translated Russian novels contain barbed warnings to the "Viennese delegation."

Let the credulous and the vulgar continue to believe that all mental woes can be cured by a daily application of old Greek myths to their private parts. (1951)

As usual, I wish to observe that, as usual (and as usual several sensitive people I like will look huffy), the Viennese delegation has not been invited. If, however, a resolute Freudian manages to slip in, he or she should be warned that a number of cruel traps have been set here and there in the novel. (from King, Queen, Knave's foreword)

As is well known (to employ a famous Russian phrase), my books are not only blessed by a total lack of social significance, but are also my proof: Freudians flutter around them avidly, approach with itching oviducts, stop, sniff, and recoil." (from The Eye's foreword)

I have ransacked my oldest dreams for keys and clues-and let me say at once that I reject completely the vulgar, shabby, fundamentally medieval world of Freud, with its crankish quest for sexual symbols (something like searching for Baconian acrostics in Shakespeare's works) and its bitter little embryos spying, from their natural nooks, upon the love life of their parents. (from Speak, Memory)

We will leave him and his fellow travelers to jog on, in their third-class carriage of thought, through the police state of sexual myth-incidentally, what a great mistake of the part of dictators to ignore psychoanalysis, a whole generation might be so easily corrupted that way! (the "Viennese Quack")

The ordeal itself is much too silly and disgusting to be contemplated even as a joke. Freudism and all it has tainted with its grotesque implications and methods, appears to me to be one of the vilest deceits practiced by people on themselves and on others. I reject it utterly, along with a few other medieval items still adored by the ignorant, the conventional, or the very sick." (from the Playboy interview)

Enough for the debate over the labor of the great man who comes to give way to uncertainty in his struggle against Positivism.

Let's see to what Slavoj Zizek dots down on the ways of the political, overall soliciting, controlling or regulating jouissance. His example in "The politics of Jouissance," indeed awesome, calls forth an erotic cultural opposition between the West and Islam; "on the one side, a woman's right to free sexuality, including the freedom to display and/or expose herself and provoke and/or disturb man, and, on the other side, the desperate male attempts to eradicate or, at least, keep under control this threat (recall the ridiculous Taliban prohibition on metal heels for women-as if, even if women were entirely covered with cloth, the clinking sound of their heels would still provoke men)?" Again the political by way of Odradek, "an object which is trans-generational (exempted from the cycle of generations), immortal, outside finitude (because outside sexual difference), outside time, displaying no goal-oriented activity, no purpose, no utility... " with Lacan Jouissance is that which serves nothing. "There are many different figurations of the 'Thing-jouissance' - an immortal (or, more precisely, undead) excess - in Kafka's work: the Law that somehow insists without properly existing, making us guilty without us knowing what we are guilty of; the wound that would not heal and does not let us die; bureaucracy in its most 'irrational' aspect; and, last but not least, 'partial objects' like Odradek."