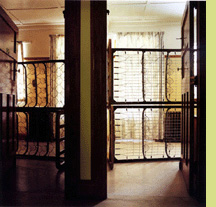 Cathy Lebowitz: Jane and Louise Wilson were responding to a particular place and social history in their video installation "Erewhon," New Zealand in the early 20th century.

Josefina Ayerza: Oh yes, I have the actual story: Higgs, a sheep farmer, and Chowbok, an old man, decide one day to visit the forbidden country that lies beyond the mountains. When they find a pass through the mountains, Chowbok gets frightened and runs home, so Higgs goes on alone. After a dangerous journey, he wakes one morning surrounded by beautiful shepherdesses. They take his belongings, give him a medical exam, and throw him in jail.
There he learns that he has come to Erewhon, an anagram for nowhere-when read backwards-well approximately, it spells Nowhere. In this country, illness is considered a crime. Sick people are thrown in jail; sickness is their own fault. Even sad people are imprisoned, for grief is a sign of misfortune and people are held responsible for actions that made them unfortunate. People who rob or murder, on the other hand, are treated kindly and taken to the hospital to recover. No machines are allowed in Erewhon as one philosopher thought that machines could rapidly evolve and take over the world.
Higgs is invited to dinner with Nosibor, a recovering embezzler. He stays with his family and falls in love with his youngest daughter Arowhena. Nosibor insists that the eldest daughter marry first, so Higgs goes to study at the University of Unreason, where students study anything that has absolutely no practical purpose. Arowhena and Higgs meet there secretly and when Nosibor finds out, he is very angry. Higgs and Arowhena fly away on a balloon. They land in the sea and are taken to England where they marry and plan a missionary trip to Erewhon.
Samuel Butler, 1835 - 1902, moved as a young man to the then new colony of New Zealand. On his return to England, Erewhon was published. A satirical novel, critical of what he sees as the contradictory logic of the late nineteenth century, knowledge has become impractical. Erewhon's attitude toward illness is at odds. Though it was Victorian times. With the passage of the Contagious Disease Act and other laws individuals could be forced into medical exams, removed from their homes by the police to be kept under philanthropic groups surveillance. Prostitutes on the watch, it was largely a reaction to an increase in syphilis.
Such attitudes still exist. Smokers, alcoholics, drug-addicts, schizophrenics, people with AIDS are sometimes treated as criminals. If they had behaved properly, they wouldn't have such medical problems.

CL: But even without this information the show is engaging and odd. The multiple screens on which the videos are projected are turned into little shelters.

JA: Let's call it a libidinal space, which is another way of saying nowhere, why for? At once confronted with a magnifying image, be it the skeleton of a former building raising against a cloudy sky, mirrored over the water of a swamp together with the cloudy sky and some bushes, you are inside. Over, a woman dressed in jogging clothes, hanging from a bar that sits across the upper part of the structure, the screen on which she is projected turns into a little shelter... I had to think the sheltering issue attests for a separate drive-in this other space, pending from an other time...

CL: The women posing in the gym are based on photos of a ladies' exercise class from 1910.

JA: Indeed a riddle of both, space and time, the women attired throughout the gym room stage an experience which is not their own... Former terms implicated in their posed stillness, it is the look alike of a photograph. Likewise the contour of their bodies is involved. Other to themselves, they look and they don't look like contemporary women. Roberta Smith, in her Friday NY Times review, appeals to their hypothetical virginity. If the assumption knocks off space, draws back time-from conversion, from transition-the actual stance, imposing enough, wields in the apologue of eternity.

CL: The history the Wilsons refer to involves repopulating an isolated continent after WWI and a secretly endorsed eugenics policy.

JA: The human myth, the famous dream with all its dubious connotations, already in 1870 Darwin writes, "There is apparently much truth in the belief that the wonderful progress of the United States, as well as the character of the people, are the results of Natural Selection; for the more energetic, restless, and courageous men from all parts of Europe have emigrated during the last ten or twelve generations to that great country, and have there succeeded best." Charles Darwin, The Descent of Man, p. 147.
Curiously enough the book is called The "Descent" of Man. Of course we know this is the descent connected to blood, lineage... still, it sounds rather paradoxical that man along history would persist with the eugenics policy as a way to perfect the human race. Inbreeding fails to achieve perfection, the way the sons of kings that married their family failed to make them prettier in behalf of making them defectuous. Again, I don't think the character of the people in the US, are the results of Natural Selection... Contrariwise I infer their good disposition comes from an incommensurable mixture that accords for the very melting pot where the selection happens on its own. And this selection is not natural rather it's cultural - based on adaptation, brainpower...

CL: Yet the women in the video seem somehow aware of the artifice. They suppress smiles and have an air of self-consciousness. This creates for me an exciting tension.

JA: In the interpreting of the scene lies the illusion and the complicity, foreclosure of space and time bound to derive from the Erewhon people's air of self-consciousness-they "know" what they are up to.
CL: Although originally intended to promote health, the positions they hold are awkward. Each person appearing the same but unique in the lift and bend and stiffness. What did you think of when you saw these women holding these postures?

JA: The notion that what exists, ex-sists outside space and outside time is significant. Why? Time introduces negativity-disappearance, wear and tear, aging, death, decline. Space introduces perspective, scenery, the gaze. Freud says one cannot look at death in the face any more than the sun. 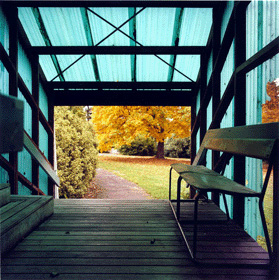 Outside however is the realm of the word, the spoken word... The uttered. What first pulled my attention when I saw these postures and the women holding them was the dormant in the scene's frozen quality. It is not only being which one removes from time, also truth. And what if these postures and the women holding them stand for the certain kind of language fit to interpret the feminine side of it?
The men died at war. Whatever is left of them, corresponding with sick, mutilated, disabled people, bears prone to inhabit a network of Public Health Institutions. Provided the actual network is precisely what gets vacated, who did it? Who implemented the vandalic action imbued with the emptying of hospitals, of clinics, of sanatoriums?
There are no men. Woman is whole. A universal concept, this is how the Word gets to speak its appearance in the figure of unique creatures posing from a place called Erewhon-"nowhere."