The Anorexic Passion for the Mirror 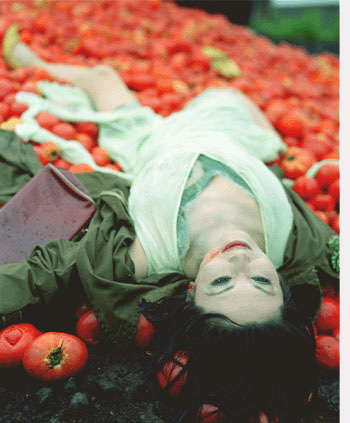 RAVAGE OF THE IMAGE

We frequently detect in the stories of anorexic subjects a calamitous event mythically linked to the subject's relationship with the mirror. This ravage of the image usually takes place as a kind of "primal scene" in which, in front of the mirror, the subject does not find the benevolent image of the Other - that is she is not capable of looking at herself from the viewpoint where she finds herself attractive, the viewpoint where Lacan introduces the ideal of the I in the schema of the inverted flower vase - but is instead confronted with a grimace of derision or contempt. This grimace clings to the subject as an unerasable image that precludes her narcissistic specularization, leaving her in a state of suspension. The triggering of anorexia, verifiable in the course of puberty - when the subject's rapport with the image of her body before the mirror leaves its state of latency - seems retroactively to signify this grimace of the Other as a super-egoic judgement on the body as a field touched by an excessive and annoying jouissance.

As to the thesis of the "cracked mirror" as collapse of the subjective specularization of the drug addict, the hypothesis of a primal scene in anorexia linked to a "super-egoic grimace of the Other" doesn't annul the subject's being and yet reveals a narcissistic deficiency, a rough edge or distortion - not a collapse of specularization. We are not dealing then with a narcissistic void, but with a distortion, a rejection, a deprecating assessment, and an annulment that triggers not so much a cracking of the mirror as a tendentiously persecutory dimension of the image. The mirror that the anorexic anxiously contemplates returns to her an image of herself, which is always imperfect, extreme, defective, asymmetric, inadequate, debased. A restitution of negativity of which the mythical source is found not in the emptiness of the mirror (as in the case of the drug addict) but in the gaze of the Other that, far from sealing the recognition of the subject, invalidates it, fixing in the grimace what doesn't work, what is deficient, the imperfection of the image or even its absolute strangeness.