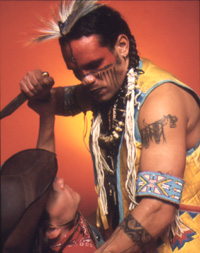 Today, Freud's seminal work continues to inspire artists. Coinciding with the centennial of the book's publication, New York-based artist-provocateur Andres Serrano produced a series of 16 large color photographs titled "The Interpretation of Dreams," which was recently exhibited in New York and Paris.4 Serrano used the book as a starting point. Rather than attempting to illustrate the text or illuminate its case studies, he explores his own dreams and fantasy images that often only peripherally touch upon the concepts Freud proposed in the book. In the context of Serrano's art, some of these images beg the limits of acceptability in a manner not unlike that of his notorious 1987 photo Piss Christ. In certain works from "The Interpretation of Dreams," he expounds upon the explicit themes of his previous series "A History of Sex," shown in 1997. Nevertheless, the recent photos manage to evoke a sense of the drama of Freud's discoveries. On a formal level, the artist continues to explore the abstract and emotional properties of Baroque art while thematically he initiates a broad discussion about the implications of psychoanalysis. Using a humorous and uniquely elliptical methodology he examines the way certain Freudian notions have been inculcated into the vital fabric of American popular culture.