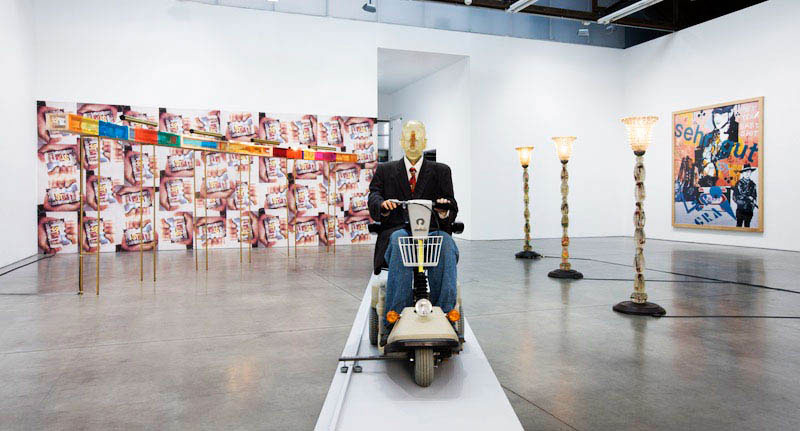 Cathy Lebowitz: The sculpture of Kippenberger's man in a moving chair, in his suit, with his plastic face, reminds me of Zizek's discussion of Lacan's idea of appearances. Appearance at its purest "occurs not when we put up a deceiving screen to conceal the transgression, but when we fake that there is a transgression to be concealed." Who is this man? What is he hiding?

Josefina Ayerza: As for Kippenberger's man in a moving chair, in his suit, with his plastic face if faking a transgression to be concealed, he may no longer pretend he doesn't know what everyone knows he knows because his thoughts are visible  inside his transparent head. To a point that everybody can see it, something in the shape of a body stands in between his eyes The feet on the man's mouth, if the figure sitting in place of his nose is a woman, she could well fit Lacan's concept about the woman being the symptom of man[]


Art: Martin Kippenberger
"I Had A Vision," 2011
Installation view at Luhring Augustine