Jews, Christians, and other Monsters 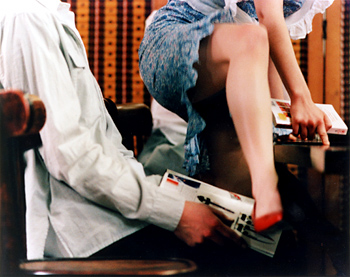 The Jewish commandment which prohibits images of God is the obverse of the statement that relating to one's neighbor is the only terrain of religious practice, of where the divine dimension is present in our lives — "no images of God" does not point towards a gnostic experience of the divine beyond our reality, a divine which is beyond any image; on the contrary, it designates a kind of ethical hic Rhodus, hic salta: you want to be religious? OK, prove it here, in the "works of love," in the way you relate to your neighbors... Levinas was therefore right to emphasize how "nothing is more opposed to a relation with the face than ‘contact' with the Irrational and mystery."* Judaism is anti-gnosticism par excellence. We have here a nice case of the Hegelian reversal of reflexive determination into determinate reflection: instead of saying "God is love," we should say "love is divine" (and, of course, the point is not to conceive of this reversal as the standard humanist platitude. It is for this precise reason that Christianity, far from standing for a regression towards an image of God, only draws the consequence of the Jewish iconoclasm through asserting the identity of God and man — or, as it is said in John 4:12: "No man has ever seen God; if we love one another, God abides in us and his love is perfected in us." The radical conclusion to be drawn from this is that one should renounce the very striving for one's own (spiritual) salvation as the highest form of egotism — according to Leon Brunschvicg, therein resides the most elementary ethical lesson of the West against the Eastern spirituality:

The preoccupation with our salvation is a remnant of self-love, a trace of natural egocentrism from which we must be torn by the religious life. As long as you think only salvation, you turn your back on God. God is God, only for the person who overcomes the temptation to degrade Him and use Him for his own ends. (DF, 48)

So what about the Buddhist figure of bodhisattva who, out of love for the non-yet-enlightened suffering humanity, postpones his own salvation to help others on the way towards it? Does bodhisattva not stand for the highest contradiction: is not the implication of his gesture that love is higher than salvation? So why still call salvation salvation?