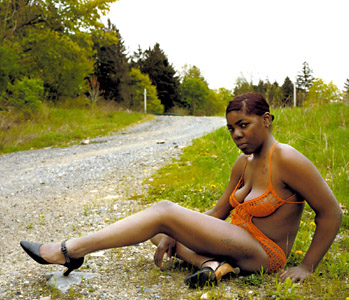 Cathy Lebowitz: Josefina, what drew you to the photograph by Katy Grannan. Two girls standing together…

Josefina Ayerza: What drew me to the photograph by Katy Grannan — two girls standing together…is not at all the fact that two girls stand together. As I see it these two girls are special, and their standing together makes for an atmosphere which suggests something more could be going on, in the emotional level of course. I like the particular ways they chose to express it.

CL: What do you imagine is going on at an emotional level?

JA: To start with I would say they are attracted to each other, and this is probably why they are dressed so similar.

CL: Yes they do seem attracted, attached at the arm. They appear to share an arm. And the girl on the right looks like the leader, the extrovert…

JA: The girl on the left, regardless of her masculine appearance — her eyelids half way closed — her look goes astray. She could be on drugs…the extrovert has a covering physical attitude, this is how their arms appear to be attached…

CL: She has a masculine appearance. She has an odd look about her. You think she is on drugs? Like what, marijuana or Ritalin? When you say the girls are attracted to each other, do you mean you think they are lovers? You say they are special. How so?

JA: What made me think of the drug is the passivity in that look. Could be marijuana, ecstasy…we don't want to think it's lithium. They could be lovers, sure, but we don't know of that. In any case the image serves very well Jacques Lacan's saying about anyone who likes a woman being a heterosexual. This is how they are special: on the one side they are in love with the same, and on the other they well differentiate themselves, quite loudly — the hair is very different, the expression in the face, the feet — one so covered, one so naked… The little heart with the masculine one, is it saying she is the softhearted one?

CL: What is their real story? We don't know. Does an uninformed interpretation reveal anything but one's own mind and prejudices. Can you say a bit more about Lacan's idea about the love of women and the heterosexual?

JA: We don't know what is their real story still we love the image because it can suggest, makes us wonder. Women's homosexuality is not easily expressed, I find it generally falls short to say. This image carries however the idea, I would say. And about Lacan's thoughts in concern with everyone who loves a woman being a heterosexual, the expression of the girls attraction for each other conveys the idea in that their love doesn't necessarily go through identification. The differentiation aspect opens up a third space — an Other. They also get to differentiate each other, bluntly — which is not the case with masculine homosexuality.

CL: What do you mean by going through identification?

JA: For the case identification between the two girls we can trace in the looking alike — the only visible hint is the color of their clothes. In any case identification is an early form of love that comes from the mother/child relation — the mother being the first object of desire, with gay men this is an important reference — they stay attached to this kind of love. Of course the woman child as well falls in love with the mother. We have three stages here: she will switch from the love for the mother to the love of the father and then to the love of the lover. Not the homosexual woman who stays attached to the love to the father.

JA: To find her sitters, Grannan places an advertisement in local suburban papers. She asks for Art Models, Artists, people for portraits… And this is how she arrives at the homes with her camera while the sitter's room is soon transformed into a stage. Untitled, for instance is from the Poughkeepsie Journal. Here the perfor-mative element is at work on both sides, the fantasy lying in the act of being photographed itself. 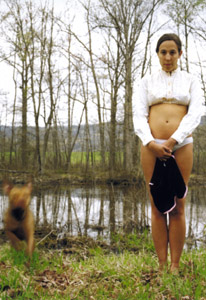 CL: The subjects of her photographs want a portrait to be taken of them. By a stranger, someone they don't know. And they must suspect that they will be asked to remove their clothes. But Grannan doesn't ask this. Although some are photographed without clothes. This girl has been photographed in her bedroom with her dog. It looks like she is dancing. What do you mean by the performative element is "on both sides"? 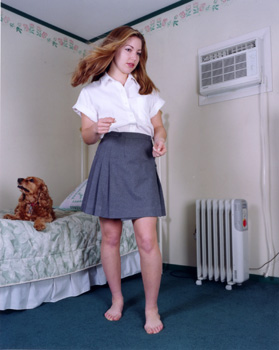 JA: By saying the performative element is at work on both sides, I imply there isn't a given subject at play. Instead you have a field of knowledge, intuitive, self-perceptive, as the binary signifier without the master-signifier in the Spinozean sense… A performative act is essentially self-validating or self-verifying. In other words, I don't think the girl gets orders, she dances — she is a dancer. Who is listening to this enunciation? God is listening. And God is a kind of ideal listener who is the guarantor of the truth of the "I am."