I think everybody has the 15 theses, it is necessary, I think, for the talk. I'll comment about the theses and you can read them. I think the great question about contemporary art is how not to be Romantic. It's the great question and a very difficult one. More precisely, the question is how not to be a formalist-Romantic. Something like a mixture between Romanticism and formalism. On one side is the absolute desire for new forms, always new forms, something like an infinite desire. Modernity is the infinite desire of new forms. But, on the other side, is obsession with the body, with finitude, sex, cruelty, death. The contradiction of the tension between the obsession of new forms and the obsession of finitude, body, cruelty, suffering and death is something like a synthesis between formalism and Romanticism and it is the dominant current in contemporary art. All the 15 theses have as a sort of goal, the question how not to be formalist-Romantic. That is, in my opinion, the question of contemporary art. 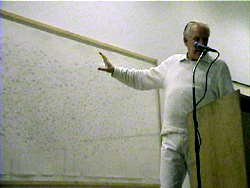 Lombardi is really a good example, and I am very glad to speak here tonight. We can see that there is something like a demonstration, a connection, points of connections. You have something very surprising, because Lombardi knew all that before the facts. We have somewhere, a great drawing about the Bush dynasty which is really prophetic, which is an artistic prophecy, that is a creation of a new knowledge, and so it's really surprising to see that after the facts. And it's really the capacity, the ability of art to present something before the facts, before the evidence. And it's something calm and elevated, like a star. You know, it's like a galaxy, see, it's something like the galaxy of corruption. So, the three determinations are really in the works of Lombardi. And so it's the creation of a new possibility of art and a new vision of the world, our world. But a new vision which is not purely conceptual, ideological or political, a new vision which has it's proper shape, which creates a new artistic possibility, something which is new knowledge of the world has a new shape, like that. It's really an illustration of my talk.

The first thesis: Art is not the sublime descent of the infinite into the finite abjection of the body and sexuality. It is the production of an infinite subjective series through the finite means of a material subtraction.

This is an intimation of how not to be a Romantic. It consists of the production of a new infinite content, of a new light. I think it’s the very aim of art; producing a new light about the world by means of precise and finite summarization. So, you have to change the contradiction. The contradiction today is between the infinity of the desire for new forms and the finitude of the body, of the sexuality, and so on. And new art needs to change the terms of this contradiction and put on the side of infinity new content, new light, a new vision of the world, and on the side of finitude, the precision of means and of summarization. So, the first thesis is something like the reversal of the contradiction.

Subtraction: the word subtraction has two meanings. First, not to be obsessed with formal novelty. I think it’s a great question today because the desire for novelty is the desire of new forms, an infinite desire for new form. The obsession of new forms, the artistic obsession with novelty, of critique, of representation and so on, is really not a critical position about capitalism because capitalism itself is the obsession of novelty and the perpetual renovation of forms. You have a computer, but the following year it’s not the true computer, you need a new one. You have a car, but the coming year it’s an old car, something like an old thing and so on. So, it’s a necessity for us to see that the complete obsession with new forms is not really a critical position about the world as it is. It’s a possibility that the real desire, which is subversive desire, is the desire of eternity. The desire for something which is a stability, something which is art, something which is closed in-itself. I don’t think it’s quite like that, but it’s a possibility because the perpetual modification of forms is not really a critical position, so the desire of new forms is certainly something important in art, but the desire for the stability of forms is also something important. And, I think we have to examine the question today.

The second meaning of subtraction is not to be obsessed with finitude, with cruelty, body, suffering, with sex and death, because it’s only the reversal of the ideology of happiness. In our world there is something like an ideology of happiness. Be happy and enjoy your life and so on. In artistic creation we often have the reversal of that sort of ideology in the obsession with suffering bodies, the difficulty of sexuality, and so on. We need not be in that sort of obsession. Naturally a critical position about the ideology of happiness is an artistic necessity, but it’s also an artistic necessity to see it as a new vision, a new light, something like a positive new world. And so, the question of art is also the question of life and not always the question of death. It is a signification of the first thesis; we have to search for an artistic creation which is not obsessed with formal novelty, with cruelty, death, body, and sexuality.

Second thesis: Art cannot merely be the expression of a particularity (be it ethnic or personal). Art is the impersonal production of a truth that is addressed to everyone.

Third thesis. It’s only a definition of the universality of art. What is an artistic truth? Artistic truth is different from scientific truth, from political truth, from other sorts of truths. The definition is that artistic truth is always a truth about the sensible, an outline of the sensual. It’s not a static sensible expression. An artistic truth is not a copy of the sensible world nor a static sensible expression. My definition is that an artistic truth is a happening of l’Idèe in the sensible itself. And, the new universality of art is the creation of a new form of happening of the Idea in the sensible as such. It’s very important to understand that an artistic truth is a proposition about the sensible in the world. It’s a proposition about a new definition of what is our sensible relation to the world, which is a possibility of universality against the abstraction of money and power. So, if art seems very important today, it is because globalization imposes to us the creation of a new kind of universality, which is always a new sensibility and a new sensible relation to the world. And because the oppression today is the oppression of abstract universality, we have to think of art along the direction of the new sensible relation to the world. And so, today, artistic creation is a part of human emancipation, it’s not an ornament, a decoration and so on. No, the question of art is a central question, and it’s central because we have to create a new sensible relation to the world. In fact, without art, without artistic creation, the triumph of the forced universality of money and power is a real possibility. So the question of art today is a question of political emancipation, there is something political in art itself. There is not only a question of art’s political orientation, like it was the case yesterday, today it is a question in itself. Because art is a real possibility to create something new against the abstract universality that is globalization.

Fourth thesis. This thesis is against the dream of totalization. Some artists today are thinking that there is a possibility to fuse all the artistic forms, it’s the dream of a complete multimedia. But it’s not a new idea. As you probably know, it was the idea of Richard Wagner, the total art, with pictures, music, poetry and so on. So the first multimedia artist was Richard Wagner. And, I think multimedia is a false idea because it’s the power of absolute integration and it’s something like the projection in art of the dream of globalization. It’s a question of the unity of art like the unity of the world but it’s an abstraction too. So, we need to create new art, certainly new forms, but not with the dream of a totalization of all the forms of sensibility. It’s a great question to have a relation to multimedia and to new forms of images, of art, which is not the paradigm of totalization. So we have to be free about that sort of dream.

It’s also the same thing in thesis nine. I don’t comment The question of the ethic of art is not to be imperial. Desperation because operation is always something like imperial operation, because the law of operation is today imperial law.