The topic-subject for Lacanian Ink 53 stands in reference to Jacques-Alain Miller’s “The Object Jouissance.” In his article, published in this issue, the actual object comes to comply with “the logic of the objet a in the drive.”
What is this particular logic about?
After some incursion—from Freud to Lacan—the objet a adds peculiarity to its intrinsic nature, to a point that you wonder how wrong or how right you are to conceive of it as satisfaction. It exists only as an idea—satisfaction of the drive is the idea; an objet a.
J.-A. Miller says, “it is not what is sought by the drive in the external world as an object—what the drive requires from the external world—but exactly what happens on the way from the source of the drive to its intended goal, whereby the mythological drive becomes psychologically operative.”

Luis Lindner is a particular artist, I’ve followed his work well along the line—in Buenos Aires where we were born, both of us, and abroad. Say his work is always a drawing, however the finished product you do not relate to as such, because the result is way more complex. How come? What makes the actual complexity could be the lettering. Lindner introduces words that address sudden topics. They could be names, at times driven from politics. Or they could be the background as well—because of the diversity of materials
My own Linders, the ones I have at home, are drawn on metal—silver background, dark lines. And he would also work on canvas, or paper… Lately, he showed at the The Drawing Center in NYC, February, 2018.

Aude White, how did I find her?... Clothing doesn’t tattoo the body, it marks it, meaning, I think, that you still relate to your clothed body, even if you don’t have your clothing on—especially the underwear, and items like jeans, or socks, which the artist talks about.
Maybe those marks are not there for everyone to see them. Let them be invisible, they will still affect the form—the body idea. Form—idea—like in Aristotle. 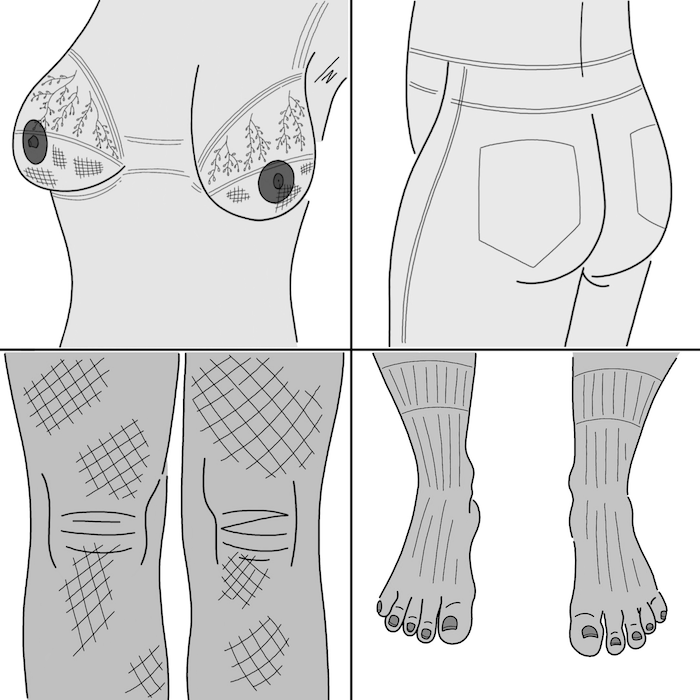