A Place for Lalangue...
ÉRIC LAURENT

From Symptom to Fantasm and Back.
JACQUES-ALAIN MILLER

[…] Thus it becomes very difficult to isolate an exception in this manner. Jakobson, in his essay on the two forms of aphasia, in which he reduces rhetoric to the opposition of metaphor and metonymy, considers that realism obeys the regime of metonymy. Realism passes from one signifier to another, it is not centered on an element which would be an exception, but moves in the signifying chain. It is the opposite perspective to that attempted by Barthes when he points out the barometer as the superfluous element which would be the clue for the real.
In Madame Bovary we find yet another barometer, which clearly indicates its signification for Flaubert. It appears in the crucial episode when Monsieur Bovary—because there is a Monsieur Bovary who is not in the title of the novel—loses all prestige with Madame Bovary when he undertakes to straighten Hippolyte’s clubfoot, and the comes gangrene, and an amputation must be carried out. We have here a representation of the ablation of a limb—it is not excessive to link it to castration—and we have the description of Flaubert, where are knotted both the estrangement of the husband from his wife and a case of barometer...

[…] At the unexpected shock of this phrase falling on her thought like a leaden bullet on a silver plate, Emma, shuddering, raised her head in order to find out what he meant to say; and they looked at the other in silence, almost amazed to see each other, so far sundered were they by their inner thoughts. Charles gazed at her with the dull look of a drunken man, while he listened motionless to the last cries of the sufferer, that followed each other in long-drawn modulations, broken by sharp spasms like the far-off howling of some beast being slaughtered. Emma bit her wan lips, and rolling between her fingers a piece of coral that she had broken, fixed on Charles the burning glance of her eyes like two arrows of fire about to dart forth. Everything in him irritated her now; his face, his dress, what he did not say, his whole person, his existence, in fine. She repented of her past virtue as of a crime, and what still remained of it rumbled away beneath the furious blows of her pride. […]
There was a sound of steps on the pavement. Charles looked up, and through the lowered blinds he saw at the corner of the market in the broad sunshine Dr. Canivet [it’s him who performed the amputation], who was wiping his brow with his handkerchief. Homais, behind him, was carrying a large red box in his hand, and both were going towards the chemist’s.

Then with a feeling of sudden tenderness and discouragement Charles turned to his wife saying to her:
—Oh, kiss me, my own!
—Leave me! she said, red with anger.
—What is the matter? he asked, stupefied. “Be calm; compose yourself. You know well enough that I love you. Come!
—Enough! she cried with a terrible look.
And escaping from the room, Emma closed the door so violently that the barometer fell from the wall and smashed on the floor.” 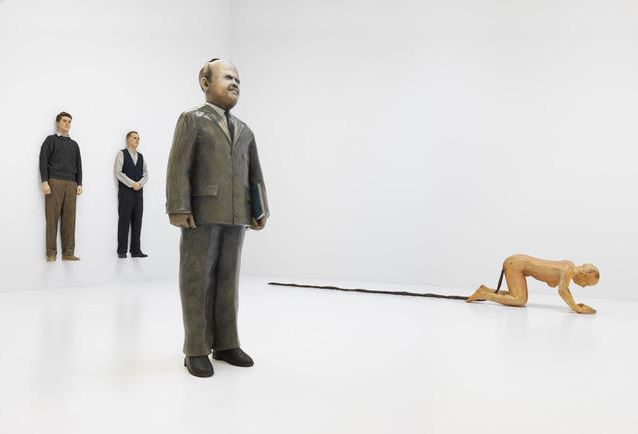 Kiki Smith, courtesy of the artist and Jeffrey Deitch.